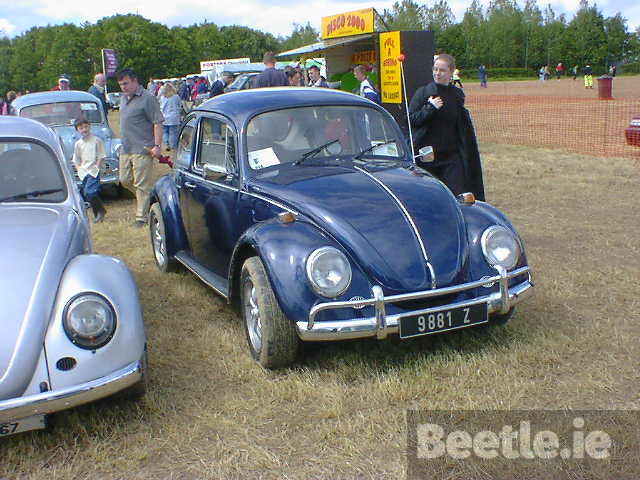 This Beetle was a regular sight at events attended by the Southern Volks Folks in the early ’00s. Back then, the dark blue 1971 Dublin reg Beetle was owned by Andy Mills from Dublin. It had been retro-fitted with the earlier 6V-style wings and lamps and the deluxe “US-spec” towel rail bumpers. The original wheels were replaced by a set of EMPI 8-spokes and a rare “Helphos” spotlamp was fitted to the inside of the windscreen.
Andy sold it around 2003 and I haven’t seen it since. Maybe it’ll resurface some day.

This set of photos is from 2002, the one year that the Mosney Classic Car show was held in Drumcar. There was some difficulty that year with permission to use the grounds at Mosney I think.

Hi Beetle.ie, I purchased this Beetle from Andy in 2003 and it was my daily driver until about 2006. In that time I replaced the towel rail bumpers with new ones and did a bit of body work as well. My Beetle needed a lot of rust repair so I sold it in 2006. I haven’t seen it since and I can’t remember who I sold it to. I replaced it with a 1976 Dublin registered Beetle 787 OIK which is also listed here on Beetle.ie