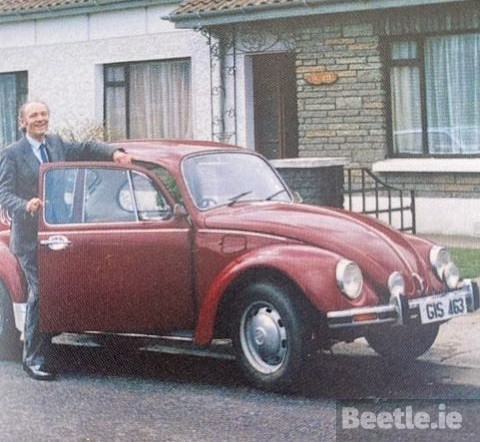 Declan Langton is the person we are thanking for the photo of this Mayo registered Beetle. Declan sent us some photos that he his friend unearthed recently. Declan’s friend’s father (Bob) only ever drove Beetles. All of Bob’s Beetles were bought from and traded back in with McAndrew’s VW dealership in Ballina, County Mayo with the exception of this Beetle.

This photo was taken in Ballina and was his last Beetle. The 1977 Irish assembled 1200 Beetle Deluxe was sent to Sheehy’s of Carlow originally to be sold but we’re not sure what happened to it after being delivered to Sheehy’s because there is a long gap between 1977 and when Bob bought it and it was registered in Mayo in April 1986. It is thought that it may have been on display in the showroom for a number of years but that has yet to be confirmed.

After Bob passed away, his daughter Mary drove the Brocade Red (L32A) Beetle for a few years before selling it to a garage in Rathgar in Dublin.