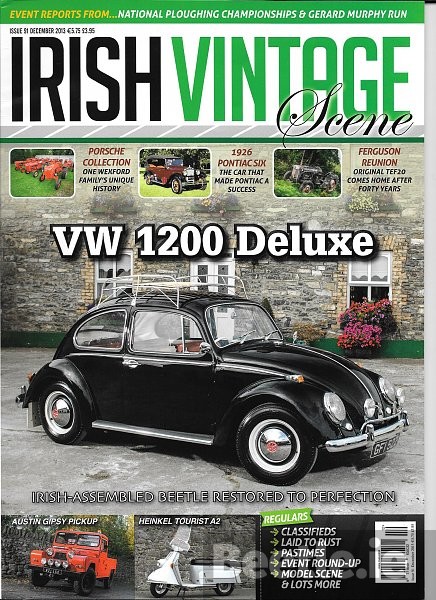 This Beetle was assembled in MDL on the Naas Road in Dublin in March 1965. The 1200 Beetle Deluxe, finished in Black (L41) was sent to Glebe View Motors in Roscrea which later became Spooner’s VW dealership. Before the Beetle was sold to its new owner on April 26th 1965, the gold leaf badge was applied to the dashboard, where it still sits today. Next, the new number plates GFI 522 were mounted on the car and off it on its very short journey to its new owner’s home in Roscrea.

After its first owner traded it in for a newer 12 volt Beetle Angela Kiernan from Knock in County Tipperary bought ‘Herbie’, as her children christened it, and used it for everything from collecting kegs of Guinness in Roscrea for their pub called the Knock Inn, to bringing her own children and any local child who jumped in and on the Beetle to and from school. Later it was semi retired and Angela would take it out of the garage to attend classic car shows with her VW friend George Campbell who owned Camvolks in Clane, County Kildare.

I bought GFI 522 from Angela in May 1997 with the intention of restoring it to original condition but as I moved away with work and later travelled abroad, the poor Beetle sat waiting for its day. It took many years and many house moves but it finally happened in late 2012 when the decision was taken to restore it or scrap it as the dreaded rust had taken hold. I had stripped GFI down and it wasn’t looking so good but Jon White of VW Spares took on the challenge and between us GFI 522 was restored to as new condition. I sourced parts, many of them NOS from all around the world to ensure it was the best I could make it within my budget while Jon and his team worked hard to cut out the rot and replace it with new metal. After completing the full restoration, on a Wednesday evening, fellow VW nut Peter Carr drove GFI 522 on Thursday to Sandown Park in Esher, Surrey for the 2013 Volksworld Show. I was working so could not drive it over but the photos Pete sent kept me informed all the way. Pete drove through the worst snow storms Wales had seen in years but GFI 522 made it, when other more modern cars and trucks were left on the roadside in Wales. By Friday evening it was on display at the Volksworld Show, having been cleaned and polished by myself and my mates Graham Cullen and David Cole. After taking GFI to the Ace Cafe in London on the Sunday evening after the show myself and Pete headed back to Ireland. I drove it back back to Limerick and in total this vintage Beetle covered almost 1,000 trouble free miles. Not bad for a car that was off the road for 16 years!

GFI’s next UK trip was to Stanford Hall where I was proud to put an Irish assembled Beetle on display. Again, a fabulous trouble free drive there and back.

GFI was featured in Volksworld Magazine and our own Irish Vintage Scene Magazine. It was also on the Irish Vintage Scene stand at the RDS classic car show in 2013 which was more than an appreciating nod to all those who helped me get GFI 522 back on the road.

The best part of this entire restoration process was being able to bring GFI 522 back to its home in Roscrea and more importantly to Angela so she could see Herbie again. To say Angela nearly knocked me over to get to Herbie when I pulled into her driveway is an understatement! We took Herbie for a spin and we called to see Liam Spooner who couldn’t believe that Angela’s Beetle was back on the road, a Beetle that his late father had applied the gold leaf dealer sticker to almost 50 years earlier.

After 17 years of ownership I made the tough decision to sell Landfill (as it was christened by the editor of Volksworld Magazine) and it went to Dundalk where it is cherished by its new owner and his children. It is the one car I would buy back if I got the opportunity.

UPDATE 09-01-19: Courtesy of Darren O’Rourke of the Original Irish Facebook page: GFI 522 is one of 157 privately registered VWs in Tipperary North in 1965. Thanks Darren

UPDATE 09-11-20: After saying I would happily buy GFI 522 back if I was ever lucky enough and I’m delighted to say that it is now parked in my garage and enjoys a gentle retirement. Having been restored in 2012 it is still in excellent condition but thanks to our damp climate it does need some TLC which will happen over time. I’ve replaced the exhaust, replaced fuel lines and brakes as well as king and link pins so it’s a pleasure to drive once more. For now I am enjoying having Landfill  home.