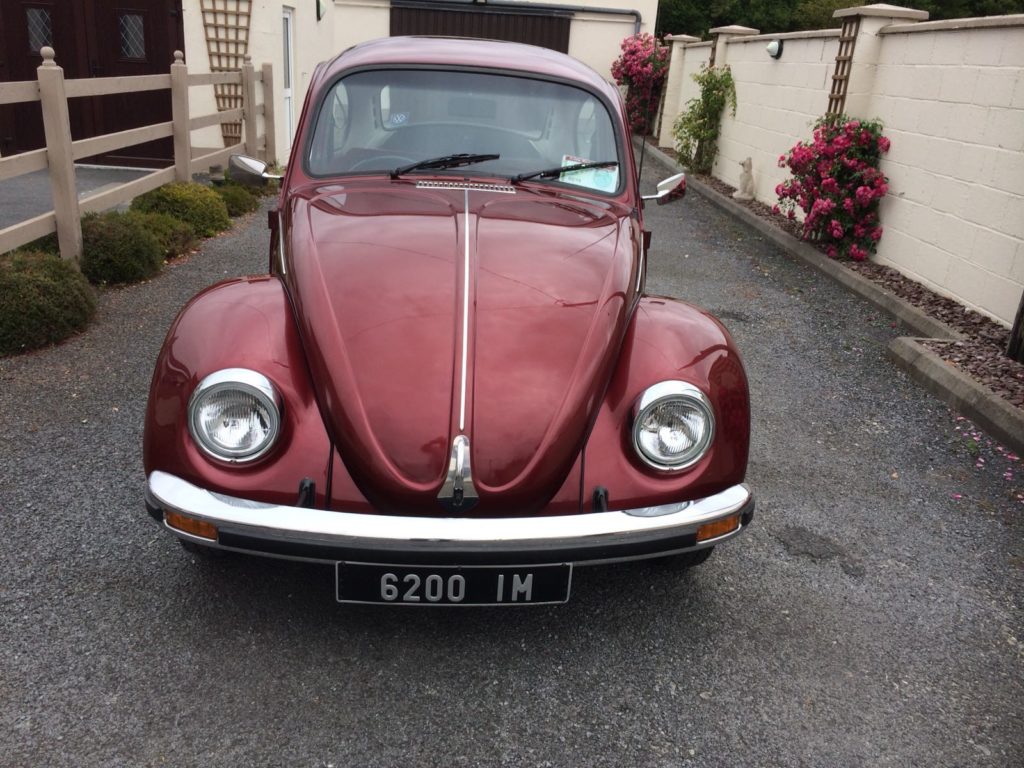 This is my 1977 VW Beetle. I’ve owned it for the last 20 years after I bought it from the original owner who owned it for 21 years.

I started my VW life as an apprentice in T. Bannerton & Sons VW dealers in Ballinasloe, Co. Galway. I had finished my apprenticeship by the time this 1977 Beetle was delivered to Galway from MDL on the Naas Road.

In October 1977 this Deluxe Beetle was purchased by a Mr. William Doherty from Eyrecourt/Killimer area, near Portumna. It was fitted with a towbar and given the registration number 6200-IM

Mr. Doherty was careful to get his Beetle serviced and maintained in Bannerton’s Garage before moving to local mechanic PJ Moran in 1988. In 1990 the car had a few battle scars from 11 years of daily driver use so PJ replaced the wings and running boards before repainting the Beetle in its original maroon colour.

In 1997 Mr. Doherty asked PJ to refresh the engine which he did with new pots & pistons, valves and valve guides and heads. The case was not split at that time.

After Mr. Doherty’s death the car was offered to PJ by Mr. Doherty’s family and knowing how solid the car was PJ didn’t hang about and so in 1998 PJ Moran became the second name to be added to the owner’s logbook.

In 1999 PJ decided that the time was perfect for a makeover so a trip to Martin Murray’s Eirespares saw PJ return with a new driver’s door and a petrol tank, not to mention the parts required to refurbish 6200IM mechanically. To give the exterior a fresher look PJ changed the standard maroon colour to a metallic maroon. While he was at it, PJ added front and rear stone guards, finger plates, a stainless steel bonnet handle finger plate and a new set of number plates. The windscreen was also replaced but PJ went for a top tint windscreen which really suits the metallic paint. New window rubbers all round finish off the Beetle perfectly.

After 20 years of ownership, almost as long as Mr. Doherty owned his Beetle, PJ has no intention of parting with his pride and joy despite being offered money to sell it on more than one occasion. The Beetle has always been in and around the Eyrecourt/Killimer/Portumna area all its life and PJ would like ti to stay that way.

With 166k miles on the refreshed engine and an unwelded, rust free body, PJ is not afraid to drive his Beetle anywhere on this island. He has complete confidence in its reliability and fuel economy.