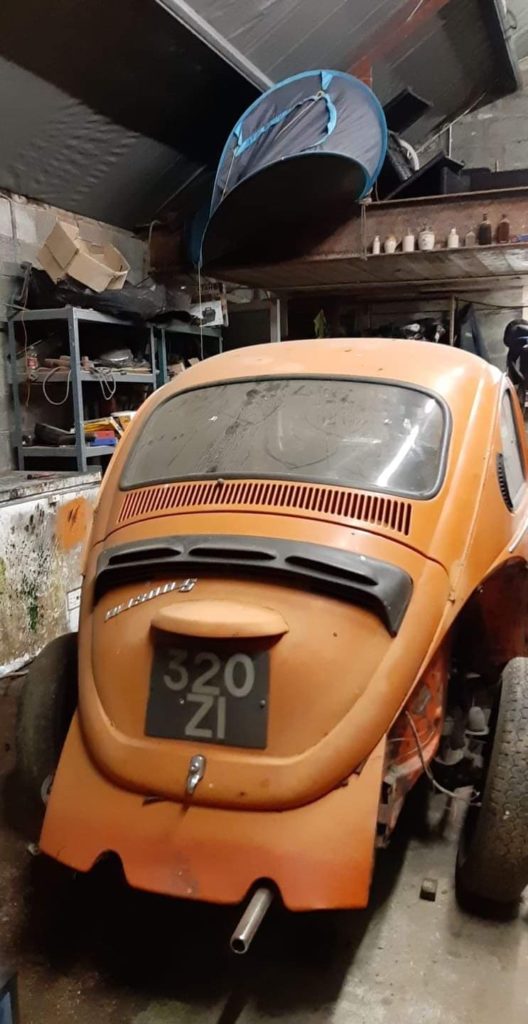 Colm Byrne in Kildare sent in some info on his rare Special Edition 1300S “Power Pack Beetle”. Colm says he bought it from his neighbour in 2017 and is hoping to have it back on the road some day soon. Colm has started stripping 320ZI and is getting both it and himself ready for the resto! As usual with any 48 year old Beetle, poor old 320ZI has suffered a bit in the rust stakes but we’re sure Colm will do a great job in breathing new life into it.

To add a little to the history of 320ZI, Beetle.ie can reveal that 320ZI was one of the very few 1300S Beetles not to be sold through a dealership. It appears to have been sold directly from the factory, a perk that we believe was only available to staff at the time. We can’t be sure if the first recorded owner was a staff member or family of a staff member but the Rathfarnham-based gentleman registered his brand new Power Pack Beetle on 9-3-73 and owned it until February 1979. The next owner owned it for the next 6 years and sold it again in 1985. Coincidentally, the third owner also owned it for 6 years! By 1991, the 18 year old Beetle had lived in Dublin South, Dublin North and Kildare and in 1998 had moved to a new owner in Offaly.

One of the owners put a few personal touches onto the car, for example the chromed bumpers were painted body colour and some nice period accessories were added, such as the desirable Kamei front spoiler and Kamei decklid vent cover. One-piece windows were also fitted and the car was treated to some chromed deep-dish spoked steel wheels to round out a typical 1990s mild customisation job.

We’ll be keeping in touch with Colm as the months go by to check in on how the resto is progressing. It’s great to see another super-rare Ireland-only 1300S/Power Pack Beetle being saved!