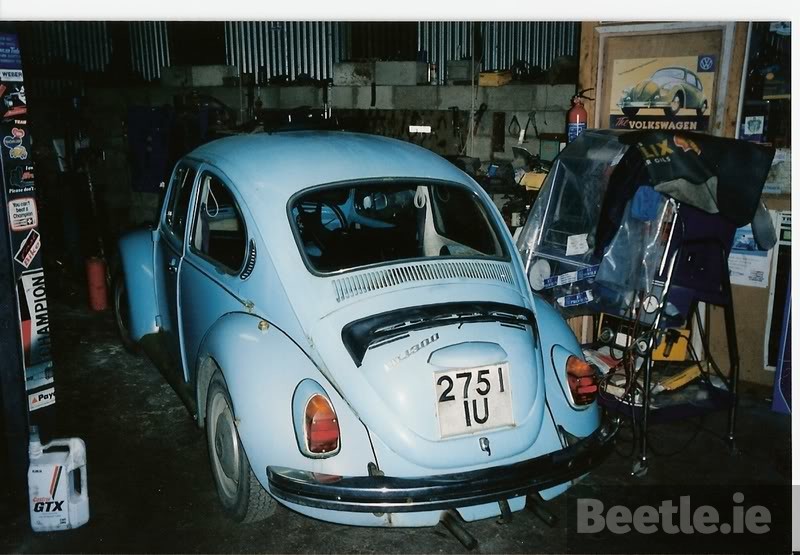 This is a genuinely low mileage (54k) two owner Beetle. It’s currently under restoration and is getting a genuine rear quarter panel and a few small patch repairs but apart from that it’s solid. The interior is like new.

UPDATE 15-01-2021: This 1972 1300 Beetle Deluxe was assembled in Dublin at the beginning of October 1972. It was finished in the rare shade of Reef Blue (L57H) and was then sent to Hayes’ Service Garage in Limerick where it was sold from on October 17th 1972. Sean Kerins worked in Hayes’ Garage as a mechanic and knew the owner who was his neighbour. When Sean later opened his own service garage in Caherelly 2751 IU followed him there for regular servicing. This Beetle was used sparingly, with one of those journeys being to mass on the Sunday where the owner would sit in the Beetle while his mother went inside the local church for mass. The mileage stayed low until the owner passed away, at which point Sean bought the Beetle, knowing just how well it was minded from new and that of course, the low mileage was genuine. Sean’s daughter Marie then used the Beetle to get to and from her first job but as daily commute was a short one, the mileage stayed low. Now sitting at just 54k miles, the 1300 Beetle Deluxe is stripped and awaiting some new panels to be welded in place before it will get a fresh coat of Reef Blue.