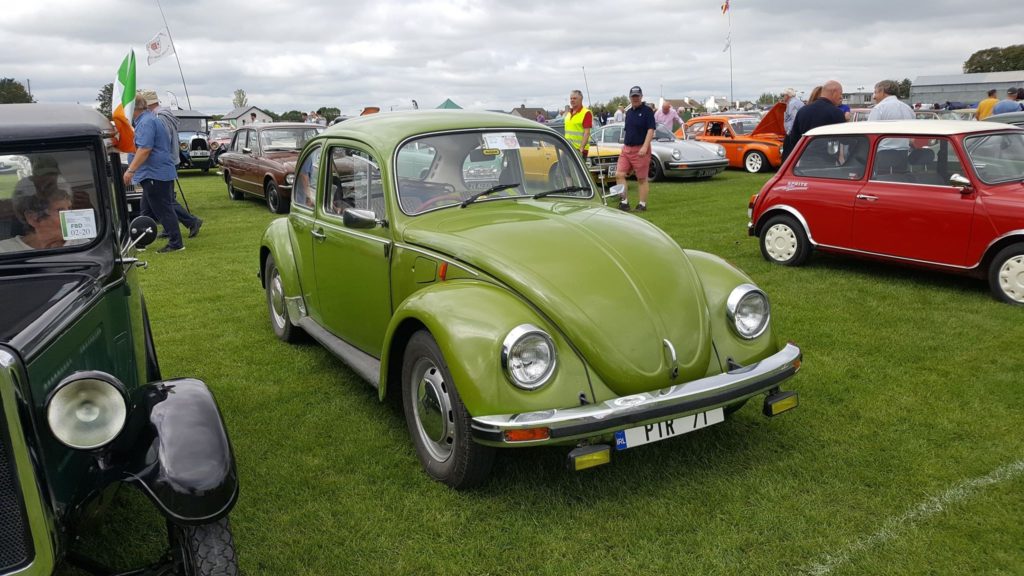 I could be accused of wearing rose-tinted spectacles but this Beetle was the car of the show for me. It was completely original, completely unrestored, only on its second ever owner and with a known history from new! I spoke with the owner, Joe McRedmond, who filled me in on some of its history:

The Lofoten Green (L61H) Beetle was bought new in Cunningham’s VW dealership in Tullamore in the Summer of 1975 and incredibly, the little Cunninghams sticker is still present on the glovebox door. It was bought by a Mr. Daly, who was a travelling salesman for Odlums Flour. Mr. Daly was from Kilcormac in Co. Offaly and Joe used to maintain the car for Mr. Daly for the first 20+ years of his ownership. Joe said that after a certain few years, every time the car came round for servicing, Mr. Daly would ask Joe’s advice on which new car to trade the Beetle for. Every time Joe recommended keeping the Beetle for another while as he wouldn’t find a better car! So Mr. Daly kept the car until he felt he really ought to have something newer, well into the late 1990s! On account of Joe knowing the car all along, he was given first refusal to buy the Beetle. Of course he jumped at the opportunity, knowing that there were at least a half dozen other interested parties. He said he went to the bank that afternoon to withdraw the cash and the deal was done.

Joe has kept PIR 71 in incredible original condition. There’s no rust to be seen, on account of it being housed in a dry garage. Here and there are some minor DIY touch-ups as would be expected for any 44 year old car and to me, they show beautifully how an old car ages and wears its patina with pride. Under the bonnet, the original Corbel paint sticker still sits where it was applied at the factory in 1975 and under the decklid the original 1200 motor sits in position, surrounded by service stickers and handwritten notes recording the dates and mileages of past services.

Joe said that it’s a car that he’ll never sell and I’m inclined to agree that he’s right. This car has been part of his life for the last 40+ years and I’m sure it’s well accepted as part of the family. He said that whenever the time comes that he may hang up his keys, he’ll pass the Beetle on to his son who I’m sure will cherish it for many more years to come.

It was a real treat to be allowed look around this car as it’s a true survivor and a great example of how a Beetle will last a lifetime if looked after well.