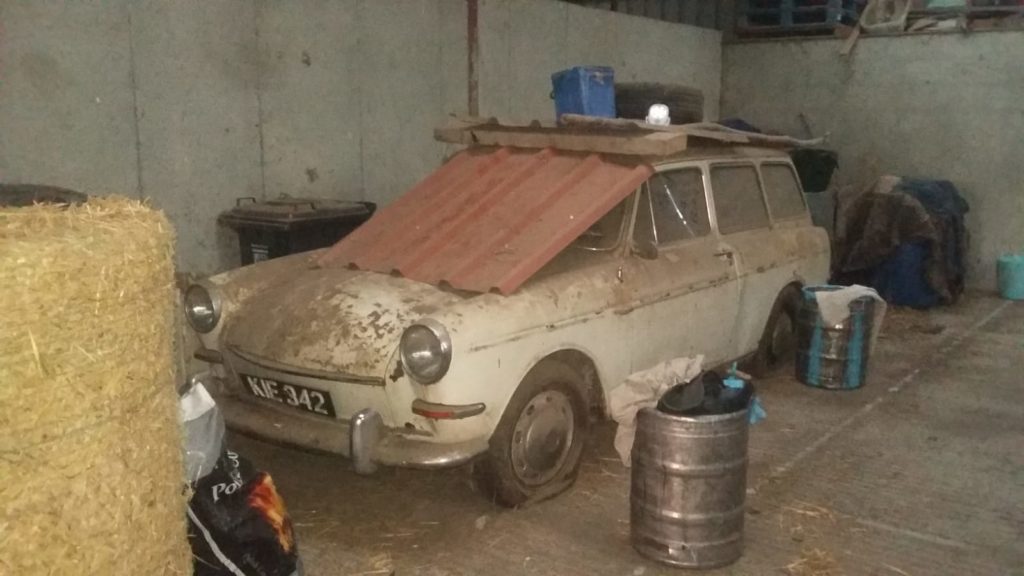 Any Type 3 is a rare sight nowadays but early Type 3s are seriously rare on these shores be they original Irish or imported from dryer climates.

It’s safe to say that if you were talking to another VW nut at a show that there was a Type 3 sitting in a barn since the early 1990’s you’d want to find out more right? If you found out that it was a genuine Irish Type 3 that had never been restored or modified I think you would want to see it straight away.

Oh, and then you find out it’s a rare Early (1967) RHD Type 3 Variant! To find an early Irish Type 3 in a barn is bordering on the impossible and unbelievable but one lucky Cork resident has proven it is possible and it is believable.

Jean Michel Shiettecatte is the lucky owner of this Irish built Type 3 Variant which was registered in County Clare in February 1967. It’s 100% original and unrestored and has been stored in the same barn (and position by the looks of it) for over 25 years so the photos of it in the sunshine are from when it was taken out of the barn for the first time in a very long time. It was last used for a wedding in 1992 and to smarten it up for that wedding it was given a very quick and not so pretty respray in the original Pearl White (L87) but apart from that the Variant has not been messed with over the years. Don’t get me wrong, it needs welding but anything that’s over 50 years old is going to need some work done to it. The original engine has just 75k miles on it and although there is no service history to back it up, the condition of the interior would lead anyone to believe the mileage is in fact under 100k.

Jean Michel tells us that the interior is in great condition and will need only a clean and a light restoration. He is tempted to repair and keep the original headlining even though it has a small hole in it but Jean Michel’s goal is to retain the originality throughout the restoration. It’s vitally important to Jean Michel that when he opens the door long after the restoration has been completed that he gets that oh so familiar vintage VW smell. To help that happen, all of the original sound deadening will be reused as will every piece of carpet, upholstery and tar boards. It is going to sound, smell and feel like an old VW should!

Under the bonnet is like new, with the spare wheel having never been used and all of the original wiring in place. Jean Michel owns a US spec 1967 Variant, or Squareback as it was called in America, and he can already see the differences between the cars made for the Irish and US markets. Dual circuit brakes versus our single circuit system, low back seats and many more small differences.

With Jean Michel’s plans being to restore his new Type 3 back to 100% factory spec he might find that task easier than us mere mortals as he has the benefit of having a large collection of hard to find NOS Type 3 parts that will come in very handy. I imagine there will also be quite a few NOS and rare Type 3 only accessories added for good measure!

Now this is what you call a true barn-find!

Well done Jean Michel from all of us here at Beetle.ie!

Update 13/06/19: Thanks to Gemma for submitting the below information and the fabulous period photos of the Variant when used for a wedding sometime in the early 1990’s.

“This is a 1967 Volkswagen Variant. It was originally owned by the Andrews Family in Knappogue Castle in Quin,  County Clare. My dad got it and has just recently sold it to a restorer last year.”