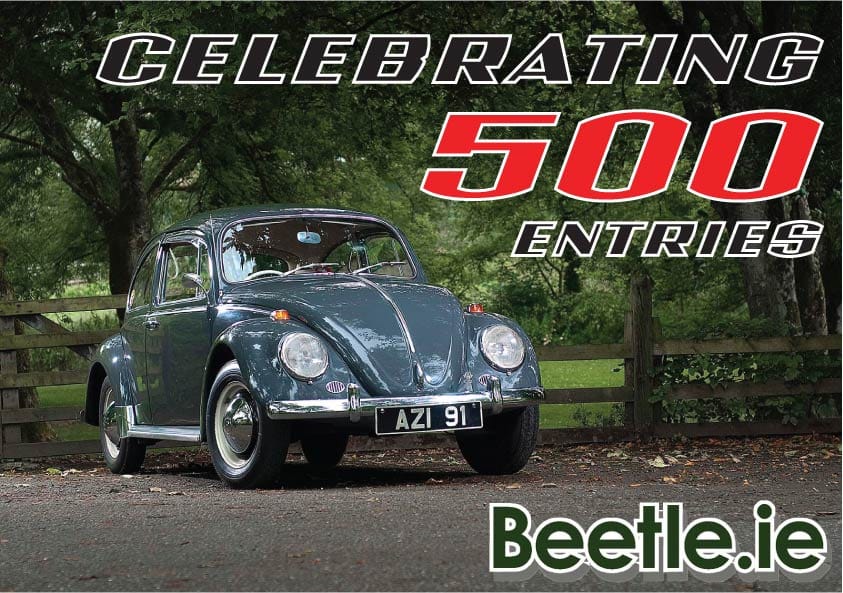 To celebrate this milestone we’re bringing you one of the nicest and most original Irish Assembled Beetles.

Thanks to everyone who submitted photos and stories about their VWs, present and long since gone. Without you, the Beetle.ie Census would not be possible.

Let’s keep the submissions going so next stop 1,000 VWs!

If we were asked who would be the perfect owner for a fantastically original CKD Beetle would be, we would have to say (and we are saying) Teresa Dollery. Why?  Well, if you read on you’ll hopefully see why Teresa became the rightful custodian of this very original Beetle and why Teresa has worked hard to maintain the originality of this Anthracite beauty.

I’m sure we can all go back to that one memory of a VW when we were younger or perhaps you recall a parent or grandparent talking fondly about their VWs, but whatever the reason to give you that feel good grin, there is usually a story there.

Teresa Dollery from Limerick is no different and as she recalls her earliest memories in a VW she laughs as the journeys that stick out in her memory are the family holidays, be they summer or Christmas, all involved being squashed into her parents’ Beetle. Most of Teresa’s holidays were to visit her grandparents which was a four hour trip so it’s fair to say, Teresa got to know the inside of a Beetle very well.

“I remember one Christmas and the weather was so bad that even our Beetle struggled to make it to top of the hill where my grandparents lived. We had to abandon the Beetle at the side of the road and walk the rest of the way but at least Santa Claus was able to make it to my grandparents’ house that Christmas”.

Fast forward to adulthood and Teresa was looking for a Beetle of her own. Herself and petrolhead hubbie Donal Dollery had spent quite a while looking at various Beetles which were far from the beauties as described. That is until one day in 2006 when they found a Beetle that was owned by Cork based VW dealer Gerry Browne of Newmarket Motors. The car was owned by his late wife and had not been used since she had sadly passed away so as you can imagine he wasn’t going to let just anyone become the next keeper of this treasured VW. Gerry happily showed Teresa the Beetle which was certainly the best unrestored Beetle she had ever seen. The Beetle had never seen any kind of body repairs and mechanically it purred. The Dollery duo knew this was the car for Teresa and Gerry felt the same and a deal was done, allowing Teresa to become the fourth keeper of this little gem.

The Beetle in question is an Irish assembled CKD Beetle that rolled off the Dublin production line in June 1965 and was bought by a doctor living in Dalkey. The Beetle was not only used sparingly but it was also garaged for most of its first twenty three years. In 1988 the doctor decided to part ways with his much pampered Beetle and his brother took ownership of the keys but unlike his brother, he never felt the love for the Beetle and within 12 months had a FOR SALE sign in the window. Gerry Browne spotted the 1200 Deluxe and could see what a gem this was and knew it was the car for his wife so bought it without hesitation.

Once back at casa Dollery an assessment showed that all it needed to bring it back to its former glory was a repaint in its original Anthracite Grey (L469) hue. Teresa, an upholsterer by trade found herself redundant as the interior was as good as the rest of the car. The nigh on impossible to source mats were in great condition and only required a wash down to make them look like new again while the headliner has no rips and has only a few marks near the back window which means that when you open the door you are hit with that familiar and unique VW aroma! The only addition was the carpet on the front bulkhead as this had frayed slightly.

At some point after leaving the MDL factory a radio was installed and an external aerial fitted. This Philips Transistor radio still works through the cars original six volt juice but if you’re used to high definition entertainment then this probably won’t be for you! The cardboard liner in the boot is starting to show its age in places but when I asked Teresa if she was thinking of changing it I was met with a defiant NO! “If I replaced this it would lose its character. It may not be 100% but it’s original and has survived this long and I won’t be the person to bin it!” The stoneguards are believed to be original while the original hubcaps are in excellent condition but Teresa has taken them off to preserve them and in their place are a NOS set picked up at a swap meet.

The main goal in all of this was not to over-restore this CKD 1200 Deluxe Beetle to showroom condition but to preserve it and make it useable which Teresa and Donal have not only achieved but surpassed.

What the Owner Says:

I love driving my Beetle and although it’s in fantastic condition I don’t believe in being afraid to use it. I look after it and in return it looks after me with reliable motoring. I’ve taken it on a round Ireland charity event called the Eireball in some of the worst weather but it never let me down. There’s something really special about it. My father who still drives a Beetle approves so it must be good!

*Thanks to Andrew Pollock for the excellent photos*