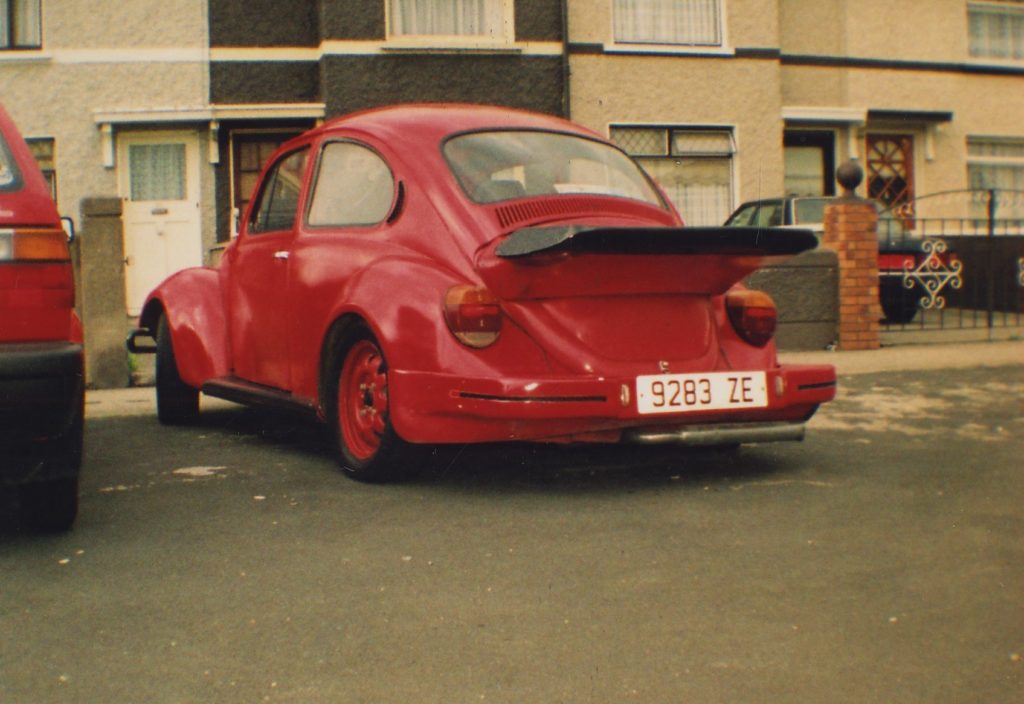 Ah, the good old Porsche kit from the 1980’s. Will it make a comeback? Who knows but they do say everything comes back around at least once so it may be the next big thing in the VeeDub world!

I took this pic in the late 80’s in Dublin but even by then this October 1972 Beetle had seen better days. The flat tyres told me it hadn’t moved in a very long time. I wonder did it survive to see the road again or was it about to head to the scrapyard in the sky?

UPDATE 25-08-2021: Thanks to Michael O’Herlihy for the update on this old Dublin Beetle. Michael’s family once owned this very car so it’s great to get a piece of its back story and history as well as get a photo from their own family archives. We can see that it was ordered from the dealership with a set of bumper overriders.

Michael: “Recently we came across a selection of old photos and among them was a photo of a Grey ’72 Beetle wearing its number of 9283 ZE.
From what we can make out the photos are from the summer of 1973. Unfortunately no one in the family knows/remembers much about 9283 ZE other than our aunt, who remembers a dark coloured Beetle which matches somewhat to what we can see in the photos.
It looks like 9283 ZE started life as a Grey 1300 with a red interior. We can only assume the Beetle was bought new by our grandparents in 1972 (with BZU 958 as a trade-in), to live around the Blackrock/Deansgrange area. If our assumptions are right the Beetle would have left in August of 1974 when the family got the all new Passat estate (481 ARI).
It would be great to know what has happened to 9283 ZE in its later life. It’s great to see that it was still around in the late 1980’s, obviously far from its original state.”

Thanks very much Michael for taking the time to contact us here at Beetle.ie and adding some history to this Beetle.