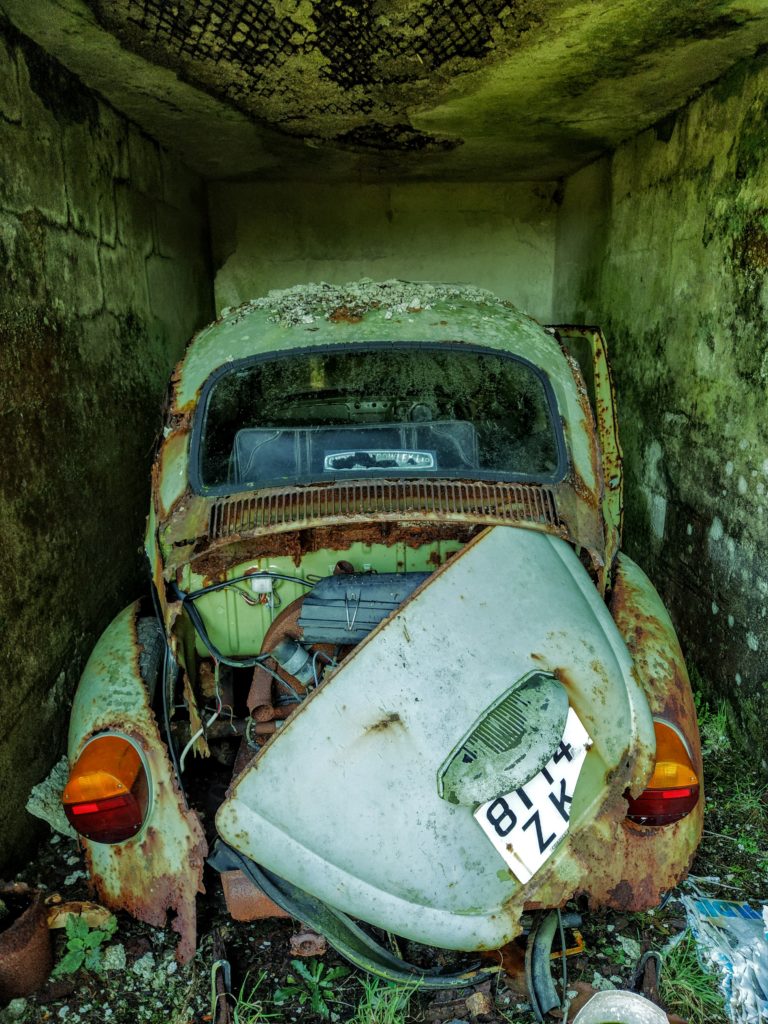 This long forgotten Beetle was found and submitted by #abandoned_westcork on Instagram. While out on their travels #abandoned_westcork found this sad looking 1977 Beetle slowly decaying into the ground and had to share it with us and we are very grateful.

As their name suggests, #abandoned_westcork Instagram profile is full of really interesting and excellently shot abandoned buildings. You will lose hours looking through their photos as it evokes memories of times past and ignites your imagination as you try to envision how life once was in those long since occupied properties. Not a million miles away from what we do here at Beetle.ie I suppose as we try and unearth the history of old VWs!

Looking at this ’77 Beetle, or what remains of it, it’s hard to imagine that there could be such a level of decay in any old VW but I suppose a life by the sea, even if it’s somewhat indoors, has wreaked havoc on the metal. This Manila Green (L63Y) Beetle was manufactured in MDL’s Naas Road plant at the start of the summer of ’77 and was sent immediately to West Cork, to Christy Crowley’s VW dealership in Skibbereen to be exact. The eager new owner was waiting for their new Beetle so it was registered to their home in Cork in July 1977. This was one of the last Beetles Christy sold new and I’m sure both he and the excited new owner of 8114ZK would have struggled to imagine how this brand new Beetle would end up.

Many of the last Beetles to be built in Ireland were built as 1200N or Base Model Beetles and this is one such model. As the name suggests they were a no frills budget Beetle with a small headlining, no carpet in the rear boot area, cardboard door cards, little to no sound deadening, no chrome trim on the bonnet, non safety steering wheel with a single centre mounted horn push, no padded dashboard, trimless window rubbers and black (not chrome) tail pipes. What is interesting to see are the rear lights because these 1200Ns had a very unique rear lens with no reverse light so the bottom of the light is red where there would normally be a clear lens for the reverse light. So even a dilapidated old wreck that would collapse into a pile if moved can still give up some parts to help towards the restoration of another old Beetle.