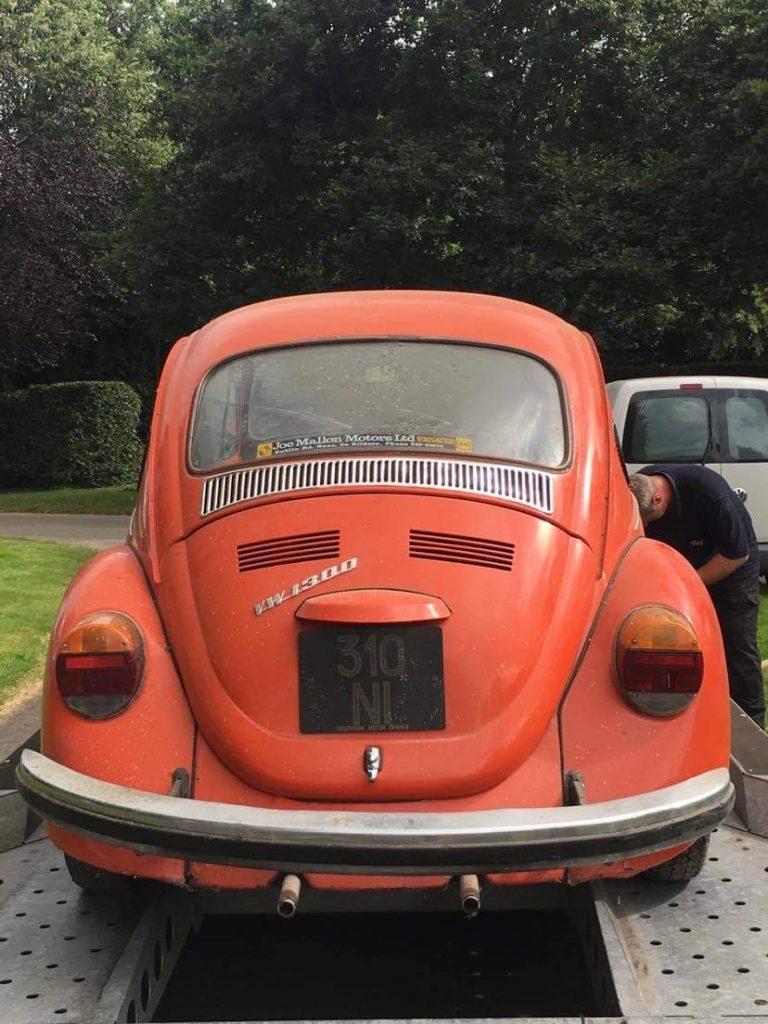 Don’t you wish you could get your first VW back? The one that holds all those memories of freedom, your first taste of the open road, albeit a little slow but the open road nonetheless. As well as being Christian Schmelter’s first car, 310 NI was also his first Beetle. Sadly, like so many of us, he sold his first VW, out of necessity but of course, he instantly regretted it. Thankfully, the person that Christian sold his Beetle to put it into storage and didn’t do anything with it so not only was it alive but Christian knew where to find it!

Although running a 1200cc engine, this Beetle was assembled on MDL’s line on the Naas Road in Dublin. It was painted Phoenix Red (L32K) and was built as a 1300 Beetle Deluxe. It was sold from VW Motors in Dublin to its first owner in Wicklow at the end of September 1975.

It’s changed somewhat with the most obvious being a colour change, the two vent engine lid and the addition of a set of Marathon wheels which have been painted white. We’re looking forward to seeing Christian out and about in his first Beetle once again.

Christian has a great history with 310 NI so we’ll let Christian tell you his story:
“310 NI’s log book lists Provident Financial Group in Bray as it’s first owner. Could this have been a company car? One can only imagine this bright little Beetle being driven around Dublin on company business in the mid 1970s. After two years it was sold to its new owner in Templelogue and then again in 1978 when it moved over to Tallaght. In 1982 it moved to Lucan and after two years it moved to a Ms. O’Hara in Kilcoole, Co.Wicklow. In 1990 it underwent an extensive restoration and respray in 1990 with Carcraft in Dundrum with the invoice totalling £2031.00. (c. €4000.00 in today’s money). It stayed with the O’Haras until 1991 when I bought it.
As a fresh faced young gent just out of college I was immediately taken by its funky colour and white Marathon wheels, a very cool combination at a time when nondescript Japanese and German cars were ever more the norm. It lived in Kenmare and Galway until 1996, making regular commutes back to my home in Kildare – this was when the only Motorway Ireland had was the Naas bypass! It made these long journeys without a hitch even though rain water was mysteriously appearing on the floor after particularly wet weather! Eventually in 1996 it was finally time to modernise and 310NI had to be sold to fund a more modern car.
A neighbour not too far from me bought my Beetle but he didn’t really do anything with it at all. Fast forward to 2019 and I made enquiries with the owner to see if he still had my old Beetle and he did. Not only did he still have it but it was parked in the same spot he drove it into all those years ago but the icing on the cake was the fact that he agreed to sell it back to me.
Whilst on the face of it, 310 NI looked relatively well, time had not been so kind. Even though it had been dry stored, the dreaded rot had firmly established itself from the ground up. A classic, floors, channels, wheel well and valance job! Even with its little 1200cc firing one suspects there is plenty of end float and an overhaul is badly needed. No doubt the 1,000s of miles travelled in the early 1990s had taken their toll here as well. 310 NI currently sits in a workshop ready for the restoration green light. It’s a significant undertaking so as soon as time and funds allow she will be making a return to the roads of Kildare.”

If you think you recognise Christian’s name it’s because he has another Beetle on the Beetle.ie Census and it’s a stunner! Why not check out his immaculate Jeans Beetle 74 KE 16004