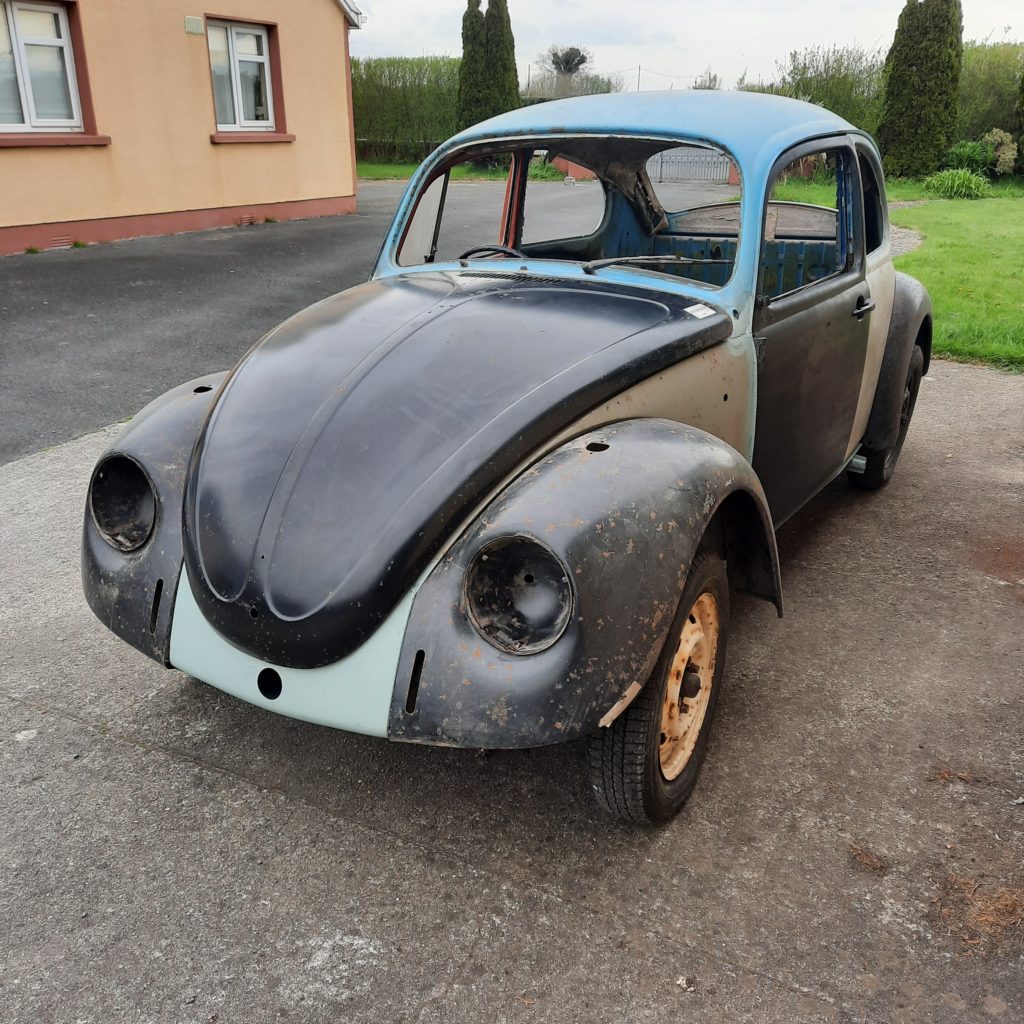 It’s not every day that I get to see an absolute bargain come up for sale but this Beetle is one that I would definitely call a bargain and for anyone looking to restore a Beetle without the headache of metalwork, I cannot recommend it enough.

This 1975 Beetle is owned by our own Trevor Brady and is the perfect basis for a restoration. We see lots of projects being offered for sale but in reality most of them are major undertakings. When someone says they have a project Beetle for sale it usually means a lot of work, more than is ever anticipated that’s for sure. As the saying goes; “you’ll never find less rust” and this is always the case with 50 year old VWs. That’s a simple fact and we’ve all been caught so when Trev showed me this Beetle that he was offering for sale I had to think if I could squeeze it into my own garage because this kind of bargain doesn’t come up for sale too often, if ever.

Before you look at the details of this Beetle, bear in mind that the average rusty project Beetle costs €3,000. That’s €3,000 just for a rusty body and pan. Now you have to add in panels, if you can get them, because many have been discontinued and what is available has rocketed in price. All that before you spend any time cutting, welding, fabricating, your personal time as well as possibly having to pay a welder to actually weld the panels into place!

This particular Beetle left the MDL assembly plant in Dublin on August 12th 1975 and was delivered to Thomastown Garage in Kilkenny. The first owner lived in Kilkenny so it was assigned the next available registration on August 25th which was 1804 IP. This Miami Blue (L51C) and was powered by a 1200cc engine but that engine was replaced with a 1200 engine from a 1972 Texas Yellow Beetle (1380 ZH) and that engine is still with the car today.

On July 28th 1994 the Beetle changed owners and by the year 2000 1804 IP was in need of some restoration work. The then owner decided it was all or nothing so spared no expense in buying the best panels available at the time, panels that are no longer available such as four genuine Volkswagen front and rear quarter panels. Try buying those panels these days and you’ll feel it in your pocket, if you can even find them!

After a stalled restoration, Trevor bought the Beetle and decided to complete the welding and fabrication with the intention, not to fully restore the Beetle, but to sell it to someone who wanted to enjoy a Beetle restoration without the back breaking or wallet busting metalwork.

Trev took the body off the chassis, finished the welding, assembled, refitted the now finished body to the finished chassis and painted on rust protector to ensure this Beetle would last. It’s now ready for the next owner to jump in and prep it for paint. This isn’t a quick tidy-up for sale exercise because Trev, ever the perfectionist, has photos of every job he did, right down to the pernickety details that most people would ignore. I can vouch for Trev’s work as he has carried out more welding and restoration work for me than he’d like to remember! If you want to see one such example, look up 307 EZC on the Beetle.ie Census and you’ll see what I mean. The man’s a perfectionist!

Here is the list of body panels replaced on this Beetle:

All the welding is done, there’s no rot, no fibreglass, no filler, no pop rivets and definitely no bodges. As it sits, you can see just how good it is. Nothing is hidden behind shiny paint. Most of the parts to reassemble are with it including the shamrock glass, seats etc. This Beetle is ready for prep and paint and more importantly, it’s ready for you to take it across the line and restore your Beetle your way.

So now you know all the facts, weigh up the price of a rusty project Beetle, the now impossible to get parts as well as labour costs for welding and you’ll see just how much of a bargain this Irish assembled Beetle really is.