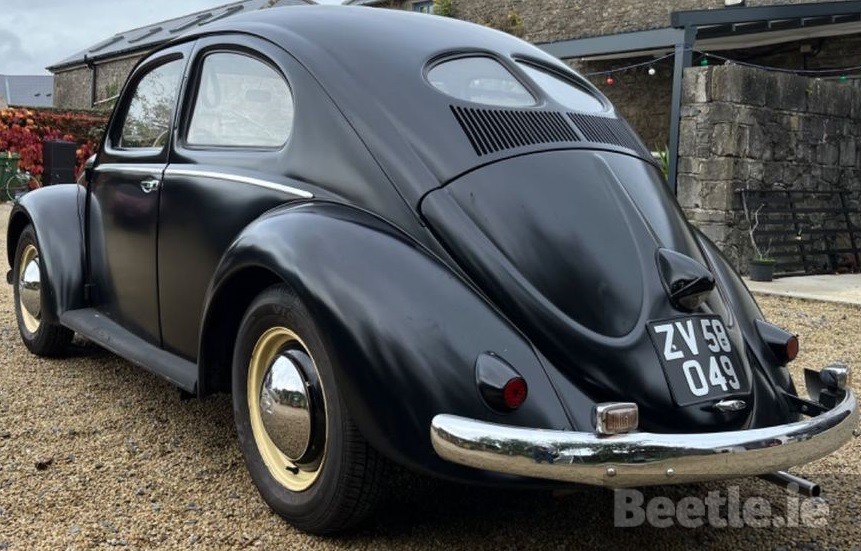 (a) Country of origin:
Croatia

Thanks in part to our damp climate, any vehicles dating back to the 1950s are sadly few and far between now here in Ireland. Most have rotted away and all that remains are memories and if we’re lucky, maybe some photographs.  When we saw this Split Window Beetle being offered for sale we, like every other Volkswagen enthusiast in Ireland, sat up and wanted to find out more.

This Split Window Beetle is being sold by David Golding Cars in Dublin on behalf of the current owner. There is not too much in the way of history available on this Beetle’s past life but what is known is that this Split Beetle was Croatian registered at one point and may have had some work done while there. To find out more, we would recommend that you order a birth certificate from Volkswagen in Germany giving them the engine and chassis numbers. The information available from Wolfsburg should tell you when it was built, what specification/colour and what country it was sold to. This information is vital if you are looking to restore a vintage Beetle back to original condition.

The interior is fabulous, and the seats look to have been upholstered with period correct material, including the rare bolster cushions. The engine has been changed to a more modern 1970s 1200cc engine to allow the owner to keep up with modern traffic with ease, something that would not happen if the original engine was pushing it along. We believe that the original engine is included with the sale so it could be returned to stock spec quite easily. I’m not sure if the gearbox has been changed also but we would imagine that it has. The car has also been converted to 12 volt electrics also.

According to David, the tyres are dated 2016 and he thinks this may be when the restoration work was completed, but again, this cannot be confirmed. Unfortunately the original 16″ rims are no longer with the Beetle so as these are extremely rare and therefore quite difficult to source these days, especially in good useable condition, allow for upwards of €2,000 for a set of rims that need full restoration.

The price being asked is €29,950 and if you think your collection will not be complete until you buy this Split Window Beetle, then why not get in touch with David Golding to arrange a viewing? David can be reached on mobile 087-7853264 or email sales@davidgoldingcars.ie

UPDATE 07/01/2023: Emilio has been in touch to confirm that the owner asked him to upgrade the drivetrain to make it more driveable and as such, Emilio and his team have installed a 1200cc engine from a 1976 Beetle. The mechanicals have also been upgraded to 12 volts so unlike every other Beetle of that era, this Split has lights that actually work and do light up the road ahead! The owner wanted to be able to drive to Cork and back which he has done since. This upgrade may not be to the everyone’s taste, especially if you’re a purist who wants every classic to be restored back to day-one specification, but this Beetle can now keep up with modern traffic in and around towns and on the open road, it can hold its own which makes it easier to drive and safer. We can’t see anything wrong with that because the other option is to leave it sitting in the garage never being used and where’s the fun in that? We hope to see this Split Window Beetle out and about on the roads of Ireland more often now.