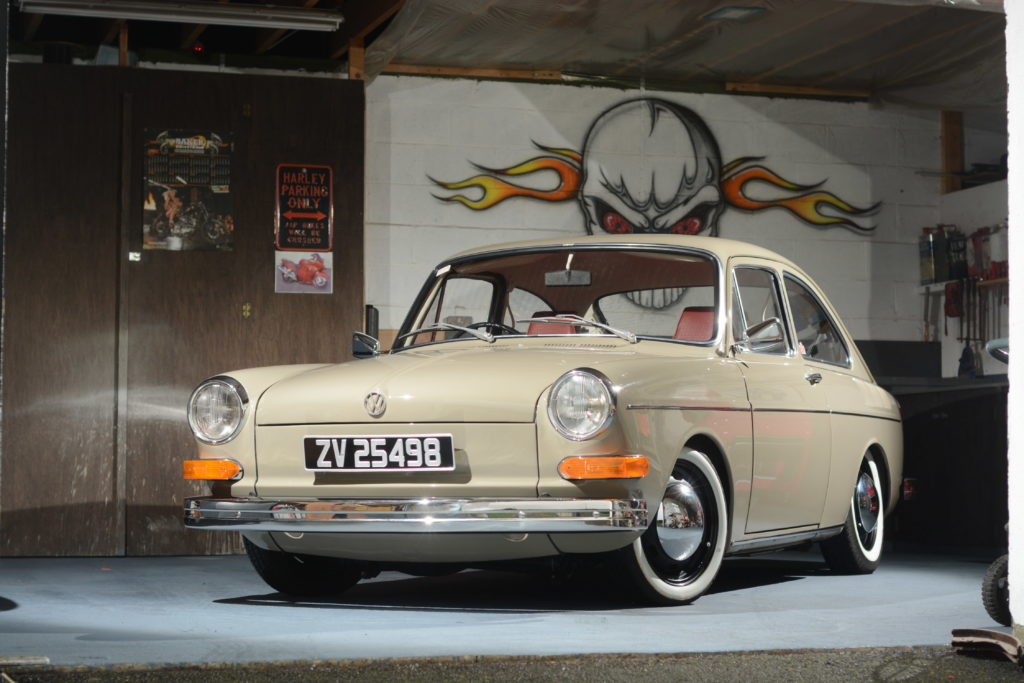 If ever you wanted to see what a fully restored Fastback should look like then Colin Dunne’s 1972 1600E needs to be your garage wall poster inspiration!

Colin bought this Fastback in July 2011 in Cork. It didn’t look anything like it does now but Colin could see the potential. He’s also one of those people that oozes talent so this full restoration was done by himself in his own garage at the side of his house, including the paint!

The first problem Colin came up against was the scarcity of parts. While he hoped to pick up many of the restoration panels at VW Action that year he was given a rude awakening when all he could find were some rear light clusters. Thankfully an upcoming trip to the US was much more rewarding as he came home with parts packed into every one of the suitcases that the party of six had. That’s right, he managed to squeeze parts into everybody’s case! The hardest to bring home were the new stainless steel side and sill trims and the replacement spare wheel well.

When Colin was faced with rot and no off the shelf panels available he made his own. The nearside front quarter panel, the offside front quarter panel, the spare wheel area was completely rotten as well as sections of the bottom of the wheel well so Colin fabricated panels.The windscreen surround also required some repair after moisture got trapped behind the window rubber. Both rear quarter panels had rot in them so more panels needed to be fabricated as did the bumper mounts. Both front wings were replaced, the floorpan repair under the battery, the rust at the front of the bonnet was cut off and while sections of the rear wings were cut out and new pieces fabricated. The rear air boxes needed sections removed and replaced with fabricated panels.

The air box is an area the rots in almost every Type 3 on the planet and Colin’s was no exception so he firstly removed the heater from inside the dash so as not to melt any plastics and then fabricated repair panels for the air box. Colin took the decision to weld up the vents in the front scuttle but to retain the look he had the vents airbrushed in place. Have a look at the photo and you will see how good it looks so he has the factory look with chance of rust ever appearing in that trouble spot again. Genius!

The chassis received a coat of primer, stonechip and 2k gloss black so this chassis is more protected than when it left the factory.

Colin painted the repaired (and solid) bodyshell in his garage. He went for an original VW colour, L568 Sea Sand in 2k. The body and all its panels were colour sanded and buffed.

Colin has always been a fan of the all red Pigalle interiors on Type 3s so to recreate this look he ordered TMI (#17) red covers for the front highback seats and the rear benches as well as matching TMI door cards. As with many Type 3s, the dashboard was cracked so Colin repaired the cracks with plastic filler and smoothed it off. To get the stippled effect he sprayed on some stonechip and then some SEM Fire-Thorn red which was as close to the TMI red as he could get. Clever young man isn’t he?

To brighten up the dash at night, the bezels of the gauges were painted metallic silver, the needles red and then a strip of red LEDs around the back of the face gives the dashboard a lift without changing the overall look.

with only 40 miles of shakedown done since completing the restoration, Colin bravely loaded up his family, two weeks worth of luggage and headed from Offaly to Bug Jam in the UK at 5:30am. The only issue was, thanks to the car being so loaded and already lowered, the towing eye was now catching on the road so a quick reverse into the garage and 5 minutes with the angle grinder put an end to that problem.

Believe it or not, Colin’s Fastback was awarded a coveted Judges Choice Award at Bug Jam 2015. Something not easily achieved from a professional restoration, never mind one carried out in a home garage.

Colin’s Fasty has since gone on to be photographed and featured in the world famous Volksworld Magazine. That’s how good this car is. If you see it at a show, make some time to check it out.

*Thanks to Andrew Pollock for the photos