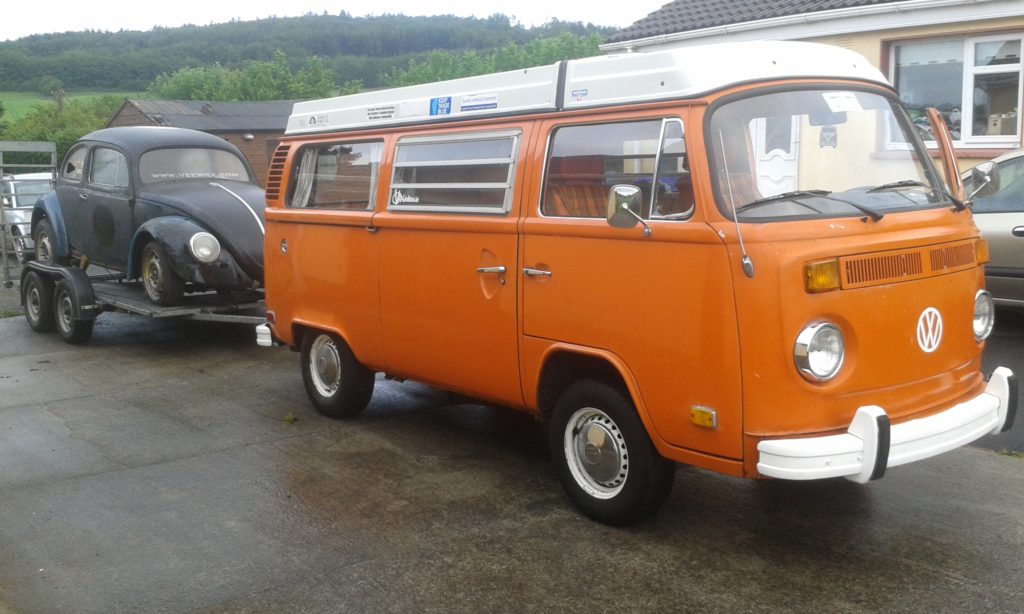 This is my 1974 US-spec Westfalia Campmobile.

I bought it in 2003 from California and once it landed my dad had to drive it from the port back home as I was too young to get classic insurance on it. Which was just as well because as soon as it landed in the yard at home, it started leaking petrol!!

I fixed up the few small issues and as soon as I could get insured a few months later, I got out and about straight away, camping, touring all over Ireland. I’ve only had it overseas once, to VanFest in the UK in 2005. Other than that, it’s a home bird in its new home!!

It’s 99% original paint. Everything bar the front panel which has had a repaint. The colour is L20B “Bright Orange” and EVERYTHING about this van is bright orange! The outside paint, the inside carpet, the plaid upholstery, the roof canvas. It’s a real 1970s nostalgia trip!

When I got it, it was missing a few of the original Westfalia equipment items, like the removable stool and the upholstered box from between the front seats. I sourced these from the USA and fitted them after upholstering them in the orange plaid to match. I retro-fitted the “headbanger” cabinet above the rear area of the van. It’s originally from a later model but fits perfectly and the veneer is the exact same. It looks “factory”. I fitted a pair of mk2 Golf GTI seats to the front, upholstered by myself in the original orange plaid. Most people don’t notice they’re not original!

The van is very original and complete but I was having a hard time living with 18mpg from the 1.8 “type4” petrol engine. So I upgraded to a 1.9 diesel engine and high-ratio 4-speed gearbox in 2013. I was very careful not to modify the van in any way that couldn’t be changed back to stock so the whole conversion was a “bolt-in” job. No cutting or welding to the van was involved. That went grand for a couple of years and really transformed the van in terms of economy and usability. Until I decided that the relaxed driving characteristics of a TDI and 5-speed would be even better to live with. So in 2016 I removed the 1.9D and 4-speed and upgraded to 1.9TDI and 5-speed. This TRANSFORMED the van!! It’s now much more usable, comfortable, economical, powerful, quiet. I love how the conversion turned out. Like the previous job, it could all be undone in a day or so and an original type4 engine refitted and nobody would be any the wiser.
I love my van and aim to preserve it as the family holiday wagon for many years to come 🙂