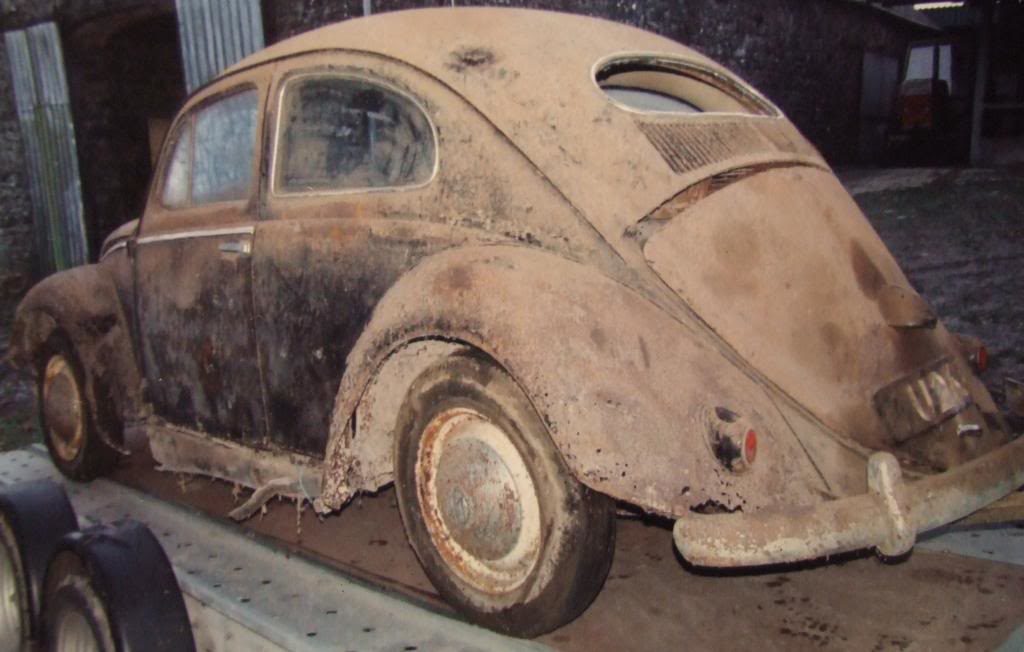 In March 2008 I, Julian Robinson, I met a couple at the Volksworld Show who liked my 1972 Beetle. It had just 55k miles form new and was a belter. They asked if I would be interested in doing a swap for a Beetle they had back in Ireland. The Beetle they said they had was a 1953 Oval Window but it was rough. I agreed to part exchange this Oval Window Beetle against my lovely 55,000 mile 1972 Beetle with nothing more to go on than photos. The car was in Ireland and I’m based in Bedfordshire, England so I didn’t get to see it in the metal but I was willing to give it a go.

There’s not too much history known about this Oval but what I do know is that it was owned by 3 brothers most its life and there was even a mention of nuns too!

The keys were left in the ignition as was the norm in rural Ireland back in the day and it was “borrowed” by someone the brothers didn’t like. For whatever reason the brothers decided not to drive it any more and it was driven into the barn in 1970. And that’s where it stayed until it was discovered in 2007 but it was decided it was too big a project to take on, hence the swap for a more complete and running Beetle.

It looked bad and it was bad but how often do you find a RHD 1953 Oval Window Beetle?

In April 2008 Henry as it was nicknamed arrived at its new home in Bedfordshire. We laughed as it was the first time it had seen rain in nearly 40 years even though it looked like it lived in a swamp. It was all there and had all the correct 1953 parts in place, apart from the engine which was a VW reconditioned unit. It was in pieces so for the time being a 1600cc motor will slot in.

After stripping the car down very carefully and removing the body from the ‘pan even more carefully I had the chassis and other parts sent to ABS Blasting to remove years of grime and muck. The original beam had adjusters welded in to give it a new stance more suited to the ratlook.

We fitted two new floorpans and then it went back to the blasters for a final blasting and powdercoating.

Back to the body, well it was rough. The wings were beyond repair so I gave 4 average spare wings I had lying about the place to the blasters to bare metal them. Then I fake patina’d them by painting them badly in black with no primer, had the blasters hit them in certain areas to expose the metal. I then hung them outside for a few months, adding some salty water along the way to help mother nature age them to match the rest of the Beetle’s body.

The underside of the chassis had the seams sealed before some rubberised stone chip was painted on followed by some shiny black 2K paint.

The Oval sits low on a sweet set of rims and grabs attention everywhere it goes. I love the Oval and so do the show judges as it has won its fair share of awards.

This car’s Irish story continues in a new chapter as it now resides in Wexford where its stablemates are an eclectic mix of rare Irish VWs and imported vintage VW metal. It’s fair to say this Oval has found its forever home in Wexford. We look forward to seeing it out and about on the Irish roads once more.