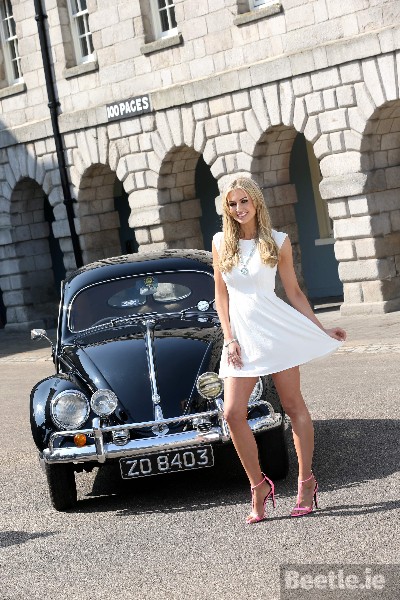 This is a very special entry in many ways. Firstly, it’s entry number 1,000 on the Beetle.ie Census which is a massive achievement for this Volkswagen project but secondly, this 1953 Beetle represents a very important time for Volkswagen in Ireland as sales, and therefore assembly numbers for the then fledgling operation, were ramping up, to the point that Motor Distributors Ltd (MDL) needed to relocate from their small but functional premises on Shelbourne Road to a much larger assembly plant on the Naas Road in Dublin. This Beetle was only one of less than 2,000 Volkswagens that were assembled at the Shelbourne Road site in 1953 but it now represents a success story that was to become Volkswagen in Ireland.

If I’m being a little selfish, this very Beetle also reminds me of a time when, as an inquisitive young teenager, I couldn’t get enough vintage aircooled Volkswagens in my life and back in the late 1980s I saw this Beetle for the first time. It has been a constant on the Irish Volkswagen scene for as long as most of us can remember.

My memory of ZO 8403 goes back to when I spent many school holidays at my Auntie Anne’s house in Dublin and from there I would venture out to find as many old VWs as I could. On one of those holidays, probably 1989, I had gone to a monthly meeting of the Volkswagen Owners Club of Ireland and was fascinated by the quality and rarity of some of the VWs that showed up. One of those cars was an immaculate, unregistered 1978 1303 Karmann Beetle Cabriolet with less than 7,000 miles from new. The Beetle was being driven on garage plates from Europa Cars in Blackrock, and the owner was an absolute gentleman by the name of Mattie O’Sullivan. Mattie ordered the Cabriolet new but never registered it, using it sparingly for shows and always using it on the trade plates.

Mattie, a long time employee of MDL, had served his time working on Beetles and worked his way up to running Europa Cars in Blackrock. Not only had Mattie risen through the ranks but he had also managed to build quite the collection of rare Volkswagens along the way. One such Beetle was the very one you see here. Mattie very kindly took the time to show me his collection of VWs that were stored in Europa Cars and at his Blackrock home but it was this Beetle that stood out over any other in his collection. Of course, as with any car collector, Mattie had more Volkswagens that were scattered the length and breadth of Ireland but for now we’re focussing on this beautiful Split Window Beetle!

When people talk about old Volkswagens being in long term family ownership they need to refer to this Beetle because this black beauty hasn’t left the O’Sullivan family since Mattie bought it way back in 1969 when it was traded into Ballsbridge Motors, where he worked at the time. Shortly after buying the Beetle, which was in completely original and unrestored condition, the engine unfortunately gave its final backfire but Mattie being Mattie wasn’t going to let that deter him. Mattie sourced one of the first Volkswagen industrial engines to be brought into Ireland by MDL and fitted into his Split Window Beetle. The industrial engine was from 1953 so matches the car’s date perfectly and it has been powering this Beetle ever since, only needing a rebuild as a precautionary measure in the early 2010s to get it back on track after a long hibernation.

The Beetle was sadly vandalised in the 1990s which necessitated a full respray but it hasn’t been restored in the traditional sense. There is no rust on this rare Split Window Beetle and no welding has been needed in its long life. It’s as close to how it left the factory as you can get and that is one of the reasons why we held this Beetle back for this prestigious place on the Beetle.ie Census. The eagle eyed amongst you will have spotted that the rear lights are sitting higher than normal but Mattie raised them to allow for the higher towel rail bumpers which normally block the rear lights somewhat.

After Mattie passed away in 1998, ownership transferred to Mattie’s son John and he has left the Beetle just as Mattie had it complete with thin whiteband crossply tyres that make this car stand out in the crowd, as do the accessories Mattie fitted over the years.

John recently ordered a birth certificate for his Beetle from Volkswagen HQ in Wolfsburg, Germany and was told that his Beetle was imported into Ireland as a completely built-up car but we all know this was not the case as Beetle assembly began in Ireland back in 1950, on Shelbourne Road, which later became Ballsbridge Motors. John queried VW’s findings and presented some information to them which lead them to do a little more digging. It turns out that the date the chassis was stamped in Wolfsburg was the date they noted for assembly of the Beetle but that isn’t the case for CKD (Completely Knocked Down) cars. The chassis was stamped on March 2nd 1953 in Wolfsburg and left the factory the following day in a crate bound for Ireland where the contents would be assembled into the Black (L41) Split Window Beetle Deluxe that you see here. A new birth certificate was then issued with the correct details, noting CKD as the production method. This was the first official CKD birth certificate that was issued by Wolfsburg.

This particular Split Window Beetle was known as a ‘Zwitter’ which is a German term that loosely translates as the transition model, in this case, the transition from the Split Window Beetle to the Oval Window Beetle. The Zwitter model with its split rear window but Oval era dashboard was only in production for six months, making this already rare Split Window Beetle an even rarer Zwitter Split Beetle. Assembled in Shelbourne Road, this Split Window Beetle was sold to its first owner in Dublin at the end of March 1953. The car has spent all of its life in or around the Monkstown/Blackrock area of Dublin with its four owners and is still there today but we hope to get John and his Zwitter to attend some shows outside the Dublin county lines so more enthusiasts can get to see and appreciate this rare Irish assembled Beetle.

John is delighted to hear that his Split Window Beetle has been awarded the one thousandth place on the Beetle.ie Census but this Beetle is no stranger to the limelight. It was on display in the old motor museum in Killarney, County Kerry for a number of years, although it wore different number plates for no other reason than the wrong ones were fitted at the time, such is the joy of having a large collection of Beetles. It also appeared in RTE’s Motor Show programme back in the 1980s as Mattie was interviewed about the then Volkswagen club and enthusiast scene. ZO 8403 was then loaned to MDL (who still had the Volkswagen franchise at the time) for a year to promote the launch of the New Beetle in 1998 as well as using it for their billboard campaign for their Polo, Golf, Vento and Passat models. MDL used the Split Window Beetle again for a further 12 months in 2000 to celebrate the 50th anniversary of Volkswagen in Ireland and in more recent times it was used by Volkswagen Ireland’s promotion of the New Beetle in 2013. When Ballsbridge Motors on the Shelbourne Road was still both a Volkswagen and Mercedes dealership, John’s Split Window Beetle made a final trip back to the site where it was first assembled to be part of their Christmas Volkswagen display in the showroom window.

Two of the photos John has submitted shows ZO 8403 on the former site of Europa Cars in Blackrock. John was lucky to get onto the site with his Split Window Beetle to photograph it before the building was completely demolished which was a sad day for John as this had been such a huge part of his late father’s life and where this Split Window Beetle was repainted and worked on.

If you would like to see more photographs or know more about this Split Window Beetle as well as Mattie’s story, they will both feature in our book on Volkswagen in Ireland when published.

Thanks to John for allowing us to feature what is a very historic Irish Beetle but one that is even rarer in so far as it has been in his family for 53 years and I don’t know too many families that can claim ownership of any classic Volkswagen for that length of time.

A final note from Cathal & Trevor

We always hoped we would hit the magic one thousand figure on the Beetle.ie Census but we didn’t know when, nor did we set a target date. This type of census on Volkswagens in Ireland has never done before and we didn’t know if it would be as popular as it has become so we simply took it one entry at a time and let you decide if you liked this idea or not. We can safely say that as we ring the bell for number 1,000 it’s fair to say you do like the idea of recording your Volkswagen history and the many stories that these motoring icons have given us.

We aim to only post photos with the consent of the person who owns those photos and we try and give you as much information to make each listing as interesting and factual as possible but this can be difficult at times as you can imagine. Thanks to the support and involvement of you all, the Volkswagen enthusiasts, we have done it, we hit 1,000 entries. We cannot grow the Beetle.ie Census without your help which is why both of us would like to say thank you all so much. We are always open to suggestions as to how we may improve the Beetle.ie Census so please feel free to contact us by phone, email or catch us at classic car shows.