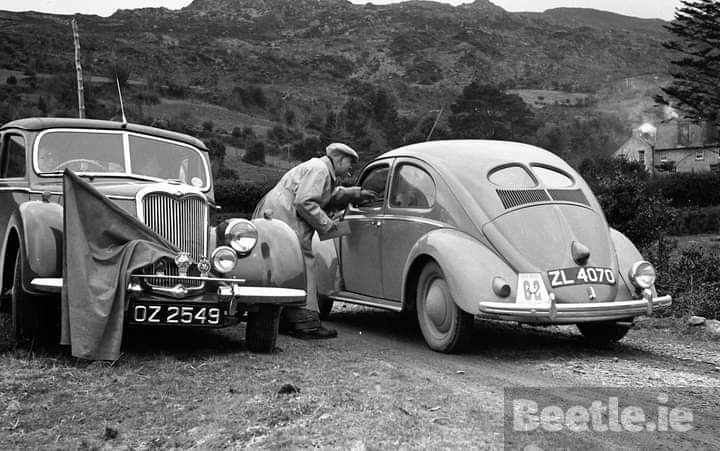 It’s always great when we are able to notch up another ‘100’ entries on the Beetle.ie Census. They may only be numbers but each entry represents a story, someone’s past or present in the aircooled Volkswagen world and often, like now, it represents a piece of motoring history.

As we get closer to another 100 we try and decide what aircooled Volkswagen will be that very special double zero entry. As we came towards entry number 900 we were in no doubt as to what it should be. We were lucky to have this photograph, courtesy of Muskerry Vintage Club, which is everything Beetle.ie is about; period photographs of aircooled Volkswagens from back in the day, with a backstory. Let’s face it, you can’t get more period than 1951, only the second year of Beetle assembly in Ireland.

The backstory of this photograph is that it was taken in Gougane Barra in County Cork in 1951. The photographer was in the perfect position to capture all of the entrants in the 1951 Circuit of Ireland as well as the magnificent Riley 2.5 Saloon which was being driven by the marshal. At a time when photography such as this was in its infancy, it’s great to have such a high quality and atmospheric photograph available to us.

The caption on the photo went as follows: A Riley 2.5 saloon at a marshal post in Gougane Barra, County Cork on the Circuit of Ireland in 1951. Split Window VW Beetle checking into the control.

Darren O’Rourke, the man that heads up the Original Irish Aircooled VW Facebook group, added the following information which brings this photo to life. Darren: “This is one of a team of three Beetles entered by a then VW employee and subsequent dealer Noel Gleeson.”

Here’s to the next 100 entries, which will take us to the magic 1,000 so if you have any photographs with aircooled Volkswagens, be they period photographs, old family photographs or present day shots, we’d love to add them to the Beetle.ie Census!

Thanks to Ted from Muskerry Vintage Club for the photograph and Darren from the Original Irish Aircooled VW Facebook group for bringing this photo to life with his information.