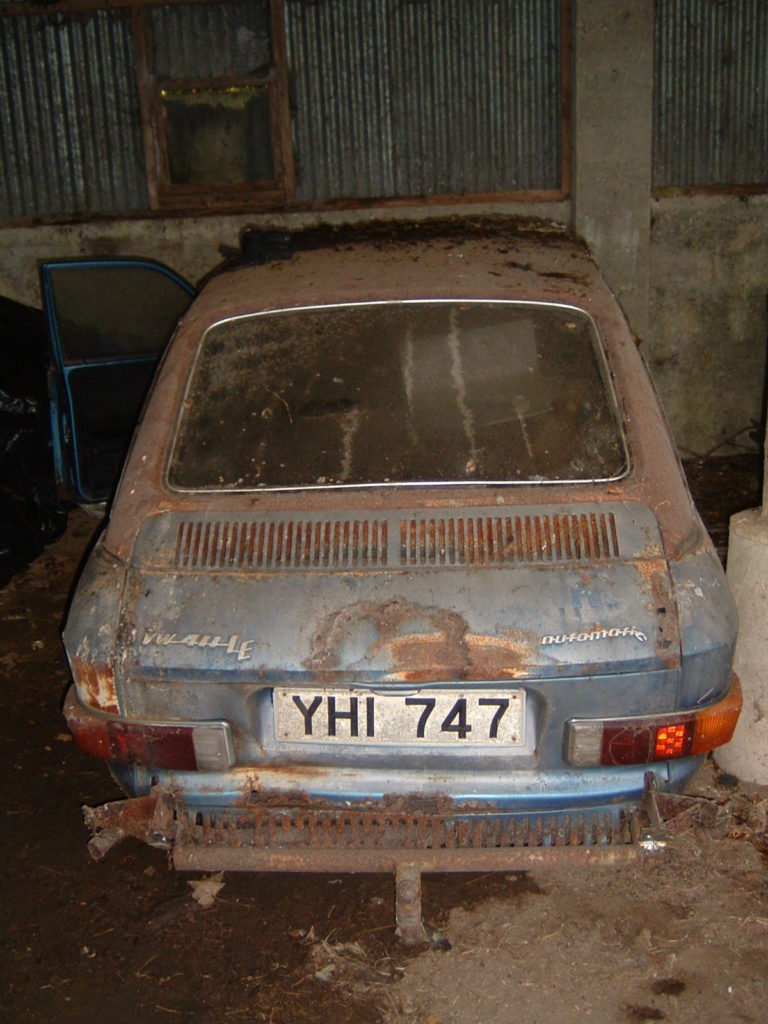 I first spotted this car back in 2008 or so in a field off a road I frequently cycle. I recognised it as a Type 4. After a short while it disappeared and I thought no more about it.
After I became aware of Beetle.ie in 2018 I thought I might look it up again to see if there was any chance it was still around. Looking from the road in 2008 it looked pretty bad so I wasn’t holding out much hope for it 10 years later.
The car itself is a 1971 411LE with automatic transmission. It was bought new from Andy Dillon VW dealers in Clonmel by an American gentleman with the intention being to use it as his holiday car. Each year he would travel back to Ireland and be collected from the airport, brought back to the garage and then he would travel around Ireland in his 411. When his trip was over the car was stored in nearby Fethard until his return the following year. And so it continued, the car toured in the summer and slept indoors in the winter until he died in the late 1980’s or early 1990’s. The car was used for a short time by the son of the garage owner in Fethard to take him to and from college but then it sadly fell out of use and was abandoned in a field behind the garage.

Fast forward to 2008 to when it was rescued by a local Clonmel man, Richard who recognised that a 411 was a rare vehicle. Unfortunately it was too late for the 411 at this point, with the floor almost totally gone and many other sections badly effected by rust. Richard did manage to start the car and got it to move a small bit under its own power. To his credit Richard brought the car indoors and has kept it despite it being a hopeless case. When I examined the car in February 2019 I spotted that in particular the engine had started to slump from its correct position, indicating that the chassis was starting to fail. The 411 was Volkswagen’s first car with and integral body and chassis rather than the bolt on body of its predecessors.

The car retains most of its fittings including the original radio. Richard has the tax book and the keys.  Some of the doors seem to have escaped rust which could be of great assistance to another project. While it won’t drive again it has the potential to keep others going.  Richard is willing to sell the car but only in one go, not piece by piece. Contact Cathal or Trevor if you are interested in making contact.  The photos show the 411 in the field I saw it first in back in 2008. The photos of it in the shed are February 2019.

*Thanks to Aidan Brosnan for the photos and the report on this rare Type 4 411LE Automatic.*