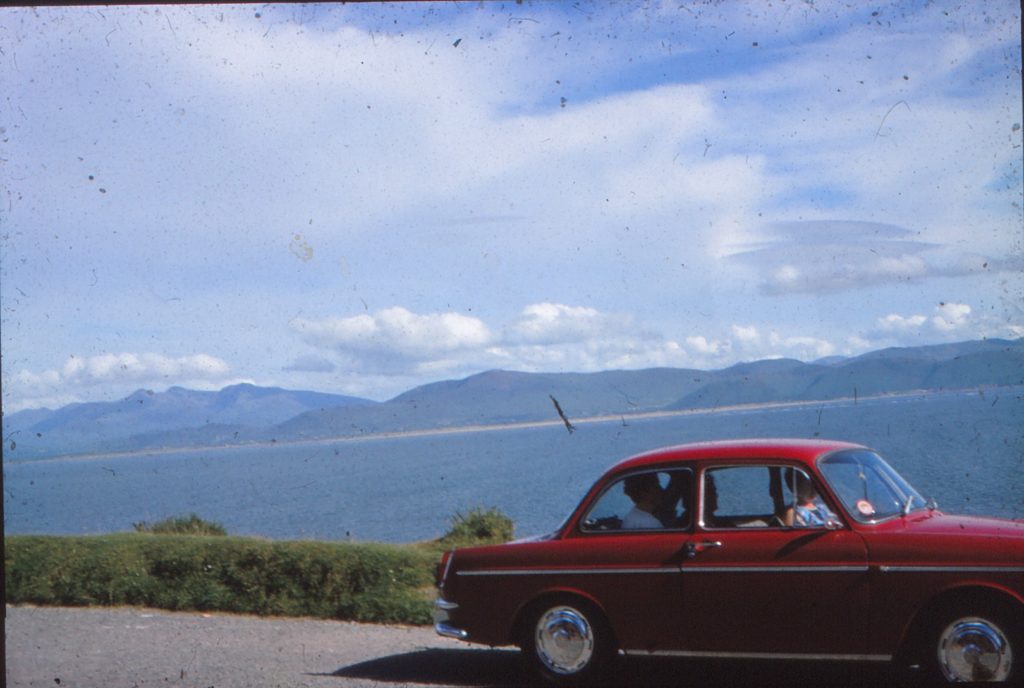 At Beetle.ie we love to mark milestones and the most obvious one is when we are fortunate enough to add another one hundred aircooled Volkswagens to the Beetle.ie Census. Well, as we approached #700 there was only one Volkswagen I wanted taking that place and here it is. It’s a 1964 Type 3 Nothchback, the earliest one we have on our database currently. It was my uncle’s car and is very special to my cousin Aidan so we are delighted to be able to bring this rare Irish assembled Volkswagen to you.

The car in question is a 1964 1500S Notchback that was assembled in Dublin. It was painted in the most glorious colour on a 6 volt VW and that is Ruby Red (L456). This Notchback must have looked very special when it rolled off the assembly line with gleaming Ruby Red paint and complimented perfectly by the chrome body trim, sill trim and the hubcaps with Type 3 specific wheel trims. I imagine it didn’t hang around too long on the showroom floor and in May it was sold to its first owner in Dublin.

The photos that Aidan submitted were all taken in Kerry while his mum and dad were on holidays. It looks like they also took my grandparents with them. The Notchback featured in many of the photos that Aidan’s father took on that trip so it was obviously quite new to Aidan’s dad at the time and what is even more obvious is that he was very proud to own it.

My Father was from Killorglin in Co. Kerry and every summer holiday my mother, sister and myself would leave Dublin to go to Killorglin to visit dad’s family. This was my father’s second last car as he had a white Fastback in the mid 1970s when he died. I was only 8 weeks old when he died so I don’t remember the Fastback. Thankfully, my dad sold this Nothcback to someone he knew in Kerry which is how I remember the car, long after my father had left us.

I remember getting a lift in this car when I was very young, maybe when I was around 4 years old. It struck me even then that this was a very unusual car. It wasn’t because the 4 year old me recognised the fact the engine was in the ‘wrong place’ but it was because you could see the road going by through some very large holes in the floor. I’m sure some grown up had warned me not to stick my foot through the holes!

The car was registered in 1964 in Dublin and my father bought it in 1969 when it was still a relatively new car at only 5 years old. He changed it in the mid 1970s for a white 1600 Fastback.  Unfortunately he died shortly after of a heart attack but I recently found some slides of his Notchback that were taken on various holidays in Kerry long before myself and my sister were born.

My father sold the red Notchback after 5 or so years of ownership to Patrick Doyle, a famous Killorglin musician. Patrick got years out of the car and kept driving it, despite its increasingly decrepit state, a state well beyond when many others would have given up on it. It was Patrick’s only means of transport and he needed it to get to various venues with his accordions or fiddle, sometimes as far as Cahersiveen and then back home late at night with the road passing by under his seat. Eventually the rust got too bad, even for Patrick, so he called it a day around 1982 to be replaced with an Opal Kadett. The car was left with Killorglin mechanic Johnny Cahalline who used to repair the Notchback for Patrick.

In August 2002 I was on holidays in Killorglin and I got talking to Patrick. I established that he had bought my father’s second-last car. I’m not sure if I had known this previously. He said that Johnny still had the car. “Did I want to go see it?“  I did want to see this car from my childhood so we went to see it there and then!  For a car that had a rotten floor in the early 1980s, I guessed that 20 years of outside storage would have taken its toll and sure enough there was little left of it. The pillars had rotted at some stage and the roof had blown away a few years previously. I took two photographs of the remains that day.

Patrick died in 2007 and in 2018, having become aware of the Beetle.ie Census I thought I might revisit Johnny and see if I could get better pictures of the remains or even less remains.  As it turned out, Johnny had cleared out most of his scrap cars in the mid 2000s, just a few years after my visit, and it easily fitted the description of scrap.  I regretted not taking better photos in 2002 but in reality there was little left to photograph.

The photograph of it at Inch Strand taken in August 1969 suggests that my father was proud of his ‘new’ car which is sparkling in the Kerry summer sun.

UPDATE Beetle.ie 27-08-2020: We are always amazed at just how many stories any one Volkswagen can have attached to it and this classic Volkswagen is no different. Aidan had only mentioned to me that he really regrets no getting more photos of his late father’s old Notchback before it was scrapped and then we were contacted by John Knightly. Anyone who is in the VW scene for any longer than 5 minutes will have heard John’s name mentioned. John lives in Kerry and is a lifelong Volkswagen enthusiast who has a collection of VWs, VW parts and knowledge like nobody else. Not only has John the interest and knowkedge but he also shares this with owners of classic VWs by offering parts and advice to anyone in distress. In fact, many an international traveller who have found themselves in trouble while touring the Kerry area have commented on how John has gone out of his way to get them back on the road and back to enjoying their holidays. John lives and breaths Volkswagens, as does his brother Paddy so it should come as no surprise that John was able to add to this story, and not only that but he was also able to furnish us with what really are the photos Aidan wished he had taken many years ago. I’ll let John take it from here but on behalf of Beetle.ie and of Aidan, we want to thank John very much.

John: “Cool story. I have a little to add to it. I found this car in May 1992. The wind did not blow the roof off. I cut it off. I had initially bought the rusted remains of the car from Johnny for £50 but when we went to collect it I decided that it was far too rotten to rescue so I just removed the roof and the pop out windows. I had planned to go back for the dash and steering column but I just never got around to it. I still have the pop outs and I used part of the roof skin to make a dashboard for my Karmann Ghia when I converted it to RHD. So a little bit of the car still lives on! Aidan is more than welcome to copy the photos. I do understand how objects regardless of their condition can create a connection to the people who have passed away. I did think long and hard about bringing that car home at the time. It doesn’t look too bad in those pictures but all the inner structure had rotted away. We didn’t leave many VWs behind back then!”

Again, thanks so much John for adding to the story of this Notchback. Now all we need is the original owner to come forward and the story behind this Notchback is complete!