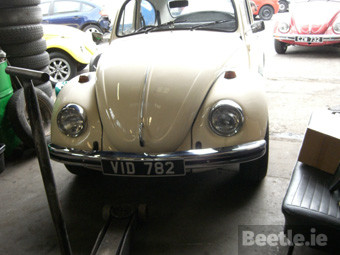 Following on from our entry for 2331 ID, a Beetle that I had first seen at a VWOC of Ireland monthly meeting at the Leopardstown Inn in Dublin and then at the Kilcommon VW Show in Tipperary, we were told by Emilio, of Emilio’s Beetles that he ended up buying that Beetle in 2006. It needed work and it sat for a number of years as a parts donor, keeping other Beetles on the road. When VID 782 came in for a full restoration in 2009, its body was beyond economical repair so the decision was made to replace the very badly rusted body on VID with the body from 2331ID. The body was then fully restored and mated to the now fully restored chassis from VID. That was back in 2010 and VID is still on the road to this very day so it really shows that no matter how badly rusted a Beetle may be, it can be saved, often using parts from one or more Beetles so in this case, two Beetles became one Beetle!

As we had noted on the listing for 2331ID, back in the day, Volkswagen themselves offered brand new bodyshells as parts which could be ordered through the parts department at your local dealer.

To give a little background to VID, it was assembled on the Dublin production line at MDL and then sent to Brady’s VW dealership in Cavan. It was finished in Atlas White (L91Z) which is exactly how it is finished now. It had a 1200cc engine and was registered in Cavan at the start of August 1974.