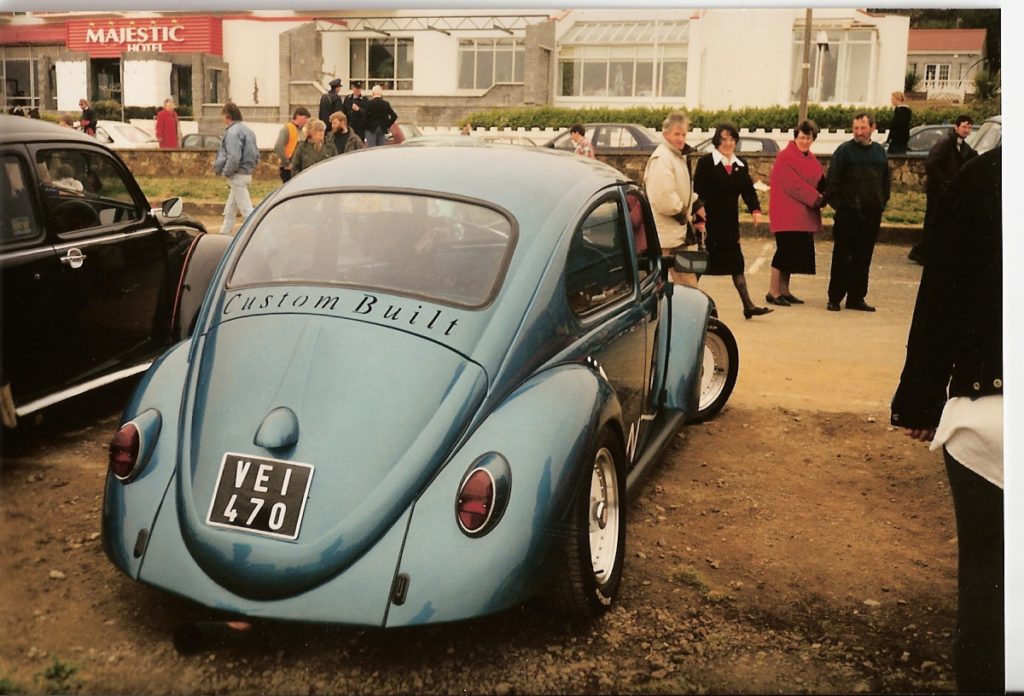 Sadly in many ways the days of customising Beetles has gone as they are now becoming collector cars and people are reluctant to modify the bodies with wild metal work for fear of impacting the long term value of their classic Volkswagen. It’s a shame really as it made up a huge part of the VW scene. Nowadays modifications are often limited to colour changes, lowered suspension and wheels.

The owner of this 1977 built but 1978 Sligo registered Beetle certainly wasn’t worried about affecting the value of their investment. For them, it was about having fun and making their Bug stand out from the crowd.

We think they certainly achieved that with lots of trick modifications such as the shaved door handles, engine lid and bonnet handles, lowered suspension, one piece windows, tinted glass, earlier wings, engine lid, front and rear valance and the bonnet. The most noticeable mod was the ‘custom built’ script, that was welded onto where the rear vent once called home.

The graphics scream 1980’s but the Centreline rims look as good today as they did then. The owner painted the centres white. The interior didn’t escape either with a smoothed dash and modern sports seats replacing the original low back VW seat.

We’re not sure what motor was in this Beetle but we’d like to think it was at least a 1600cc engine and if not, the exhaust would have made up for any deficiencies in power by blasting thunderous roars out the back!

UPDATE 27-07-2020: We have been contacted by the builder of this very Beetle, and he also happens to still be the owner of this radical custom Beetle. It’s great to hear that it is still around and more importantly, still with the same owner! I’ll let Ian tell you something about his pride & joy: “VEI 470 was our wedding car back on July 22nd 2000. My Beetle is back home in County Roscommon, still on the button but in need of welding and restoration.”

Thanks for the update and the photos from your wedding day Ian. They’re absolutely fantastic and really add to this Beetle’s history.

From our records we can see that Ian’s Beetle was assembled in Dublin in October 1977 in Polar White (L90A) and was then sent to Parke’s Garage in Ballisodare, County Sligo. It was then sold from Parke’s Garage but was not registered until the first week in January 1978, on January 9th to be exact so the new owner may have been driving around with ‘FOR REG’ on the engine lid which was a common practice in Ireland for many years!