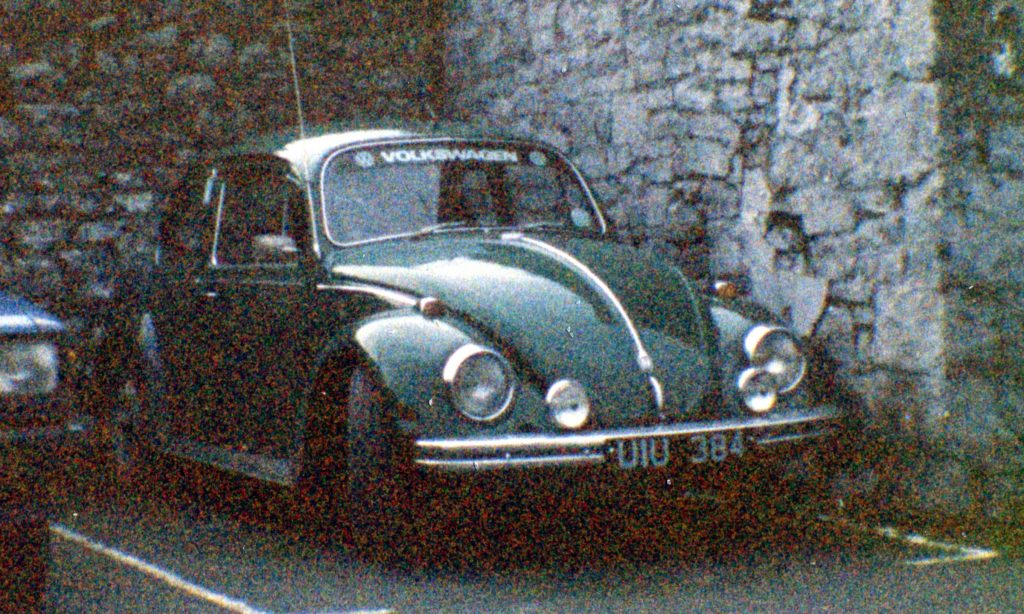 This 1200 Beetle Deluxe looks like it is finished in Delta Green (L610) which I thought was the original colour but it turns out that this Beetle was originally painted Sea Sand (L568) when it was assembled in Dublin towards the end of 1968. It was then delivered to The Service Garage, Mulgrave Street in Limerick. It was sold and registered to its first owner in Limerick County, hence the IU, and was given the registration UIU 384 on November 11th 1968.

Not much is known of the history of this Beetle but what we do know is that the last owner bought it in August 1980 when it was 12 years old. For many years this 1200 Beetle Deluxe was a regular site on the roads of Limerick City & County. Every day it could be seen driving in the Ballysimon Road and was then parked in Ellen Street Car Park all day while the owner worked in the city. This photo was taken in that very car park in November 1989. The Beetle always got that very spot in the car park and I don’t know if that’s because the owner got in there first or if it was reserved but either way, that space was always filled with UIU 384.

The owner clearly loved his Beetle because it was always clean and any issues were taken care of almost immediately. Highback seats were fitted, as were spotlights and of course the vinyl sun visor strip was a must for cars on the road in the 1980s, and this one was branded Volkswagen too! There was also a Wolfsburg crest fitted on the bonnet where the pre-62 Beetles would have had them fitted. It was really obvious that this Beetle owner really loved his Beetle and loved to personalise it too. Having bought UIU 384 in 1980, this devoted Beetle owner kept his pride and joy on the road in all weathers throughout the 1980s and 1990s, being in continuous use until January 1998. Was it retired after 30 years of service or did it meet its maker on the scrappage scheme which was so popular in the late 1990s?

I’m sure when this Beetle drove away from The Service Garage in November 1968 they couldn’t have imagined that UIU 384 would still be motoring in its 30th year.