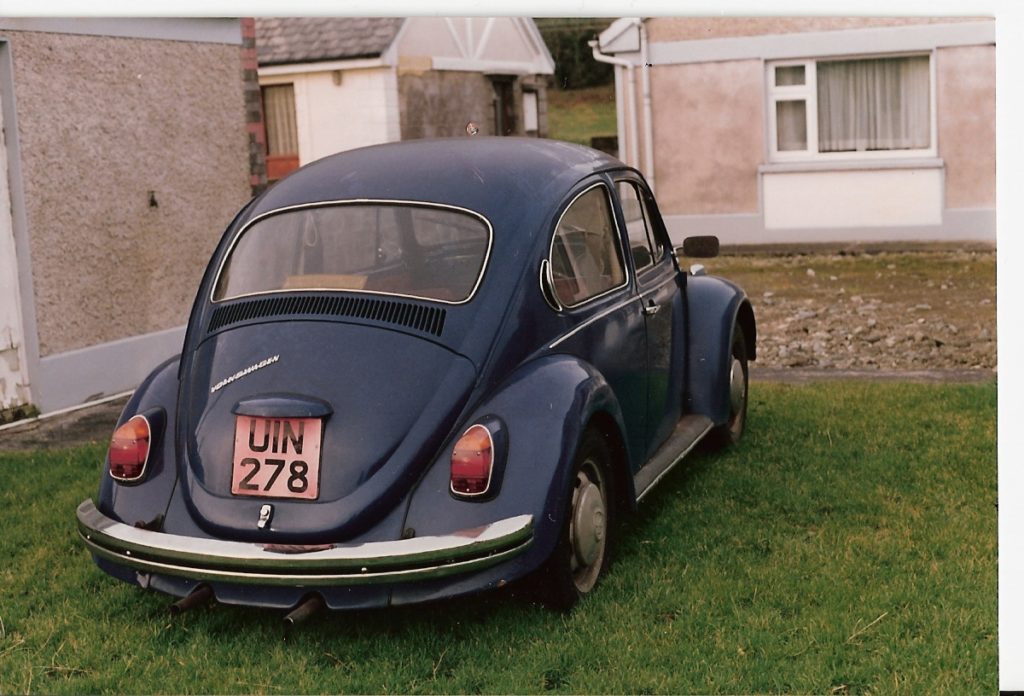 I bought this Beetle back in January 1993 after my Beetle (ZIE 986) had an electrical fire and was damaged to the point that it needed to be fully stripped and restored properly. That was just too much work at the time and the reality dawned on me that I needed a ‘good’ Beetle so the search began. ZIE was parked up while I decided what the next move was for that Clare registered Beetle.

In my search for a new Beetle, I tried all of the usual places, which of course was pre-internet so this meant classic car magazines, Buy & Sell weekly paper as well as my own club at the time, the Southern Volks Folks. There were plenty of projects that I could have bought but I had one already on the driveway so I continued my search. I think I phoned George Campbell of Camvolks two-three times a week and the calls could last far longer than they needed to but George wa a character and a mine of information so I was never going to be the one to end the calls. George knew I was on the hunt for the perfect Beetle so during one of these phone calls George excitedly said that he had received a letter with two photos that day from a man in Kerry looking to sell his aunt’s Beetle as she was now too old to drive. George said that from the photos, the Beetle looked to be all original and was reasonably priced at an asking price of £2,000

George posted the photos and the information to me with an instruction to go and buy it or he would! The next weekend I borrowed my father’s Ford Sierra and headed for Killarney. What I found when the garage doors opened was a Beetle, a very dusty Beetle, that was very close to the description in the letter. It was a one owner car, had low mileage, although the speedo had stopped working so it was impossible to tell the exact mileage. The interior was perfect with springy seats and no tears at all and thanks to being stored indoors all the time, the red vinyl was like new. I could see from the service history that the Beetle had been serviced regularly by a main dealer so that was promising. There were some slight rust issues and some previous repairs but overall this was one of those dream finds. The original dealer sticker was still there, although it was very hard t make it out anymore. Myself and the seller agreed on a price that we were both happy with and the following weekend my father and myself went to Killarney to collect my new Beetle.

My father drove UIN 278 back home on his insurance policy and once back home the clean up began. I removed the rear number plate too and behind it was written ‘FOR REG’ which was something I hadn’t seen for a long time. The car may have been registered on November 11th 1970 but it was on the road long before that! I had a fantastic German mechanic called Wolfgang Buttner go through the Beetle from front to back to make sure all was good and ready for many safe miles of driving and then I insured UIN 278 just after I fitted the ‘It’s not a car it’s a vintage Volkswagen’ sign where the rear number plate should go. I drove around for over a year with that on instead of a number plate. Simpler times!

The original Sapphire Blue (L50D) paint had buffed up extremely well and I was so proud to finally have a Beetle that didn’t fall to bits as I drove along and more importantly, didn’t break down all the time! Where there had been repairs wasn’t so easy to bring up to the same shine as the original paint but it looked amazing and I loved it.

When I repaired the rust at the bottom of the doors and nearside rear quarter later that year I made the decision to add some white where the repairs were and make it two-tone, the decision also being helped along by the fact I was unable to find a bodyshop who were able to match the paint, allowing for the fading over the years.

Nora Gleeson was the original owner, a school teacher from Fossa West in Killarney. She was well known because when I pulled into Divane’s of Castleisland a few months later one of the salesmen came out and said “that’s Nora’s old Beetle, a well minded car that” before going off and getting me some of its service history from their records.

After rocking around Ireland in this Beetle for thousands of very happy miles, I was heading off to America and needed to sell the Beetle, not for the money but because my mother was having none of it when it came to using her driveway as a storage facility. “No way, no car is going to be left abandoned in my driveway for god knows how long, get rid of it or I will”. I suppose looking back now I can’t really blame her when she had no love for VWs and the car could have sat there for quite some time.

Before selling I did find a paint shop that could colour match the Sapphire Blue, even allowing for fading over the years so the white was removed and it looked just like the Beetle that was assembled in Dublin back in 1970 once again.

Thankfully the owner of the garage was a VW fan so he kept the Beetle out the back of the workshop with his father’s old Notchback and had planned to restore it. A few years later I called in and although the Beetle was still there it had unfortunately been left sitting outside for a few years which had not done my old Beetle any favours and it looked very rough. Nora Gleeson would not have been impressed! I asked if it was for sale, assuming he would be delighted to see it gone but I was assured it was going to be restored, along with the Notchback that it shared the space with.

A few years after that the garage closed and I lost track of the Beetle and no doubt it didn’t get the restoration it so badly needed which is a shame really as this was such a fabulous car and when the sun hit that Sapphire Blue (L50D) paint it brought all the chrome to life. Maybe the Beetle is in storage somewhere and it might see the light of day again……..maybe!