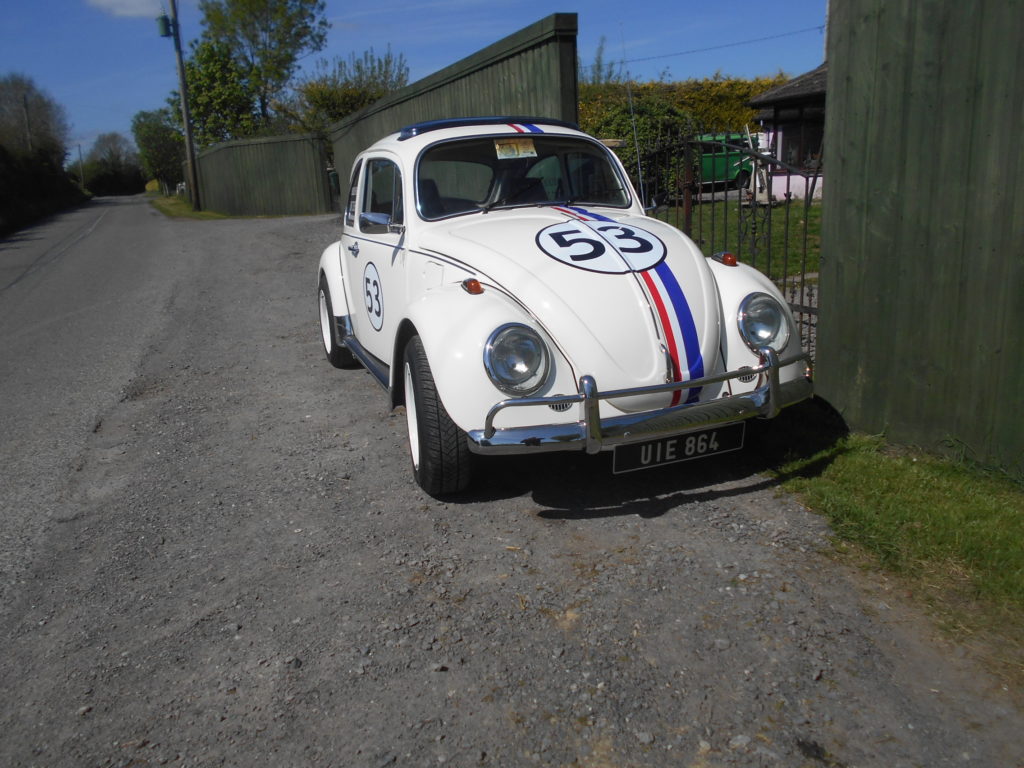 (a) Country of origin:
Netherlands

For any Volkswagen enthusiast that has been out and about on the roads of Dublin from the the mid 1980’s right up to the present day, we will assume you have seen Herbie passing you by or parked up at a show. You would think that the last thing that someone who has been restoring Beetles for a living since the early 1980’s would want to drive at the weekends is a Beetle but you’d be wrong. Emilio Macari owns Emilio’s Beetles and for nearly as long as he has been in business this Herbie replica has been his pride and joy, and he has no plans to ever say “adios” to Herbie.
The Beetle itself is a 1971  model sold new in Holland and from there it went to France for a few years before jumping on the ferry bound for Ireland in the early 1980’s.  Emilio bought Herbie, which looked nothing like it does now, around 1985. It was restored at Emilio’s Beetles, repainted white, received the Herbie makeover and was put into immediate service as a a daily driver for the next 20 years when, in the mid 00’s it was parked up waiting for some TLC but as is always the way with the cobbler’s shoes, customer Beetles took priority.
Back in the nineties Emilio travelled to many car shows in England so it was well used to many long journeys outside of Ireland. In 2015 the time finally came around for Herbie to receive some much overdue TLC and it underwent a major restoration. It still looks the same and never fails to fire right up even after a long hibernation. It isn’t used as much now as a daily driver, and let’s face it, it’s earned its right to have an easy retirement. Having said that, Emilio said he would love to use it more but restoring Beetles for customers is nearly a 6 day a week job now, such is the demand. Don’t feel too bad for Emilio though because when he does get in and fires up the engine to hit the road for a Sunday blast he has a powerful bored out 1600cc engine mated to the desirable 1300S gearbox to push Herbie along the windy roads of Kildare!
I’ll leave the last word to Emilio himself; “Over the time I’ve had it, it has been a very lucky car for Emilio’s Beetles because when it was around Dublin, long before the days of the internet we would would get so many phone calls on a weekly basis from people wanting to bring their kids in to get a photo with Herbie and also people that wanted to buy a Beetle or have their own Beetle restored. Yes, Herbie is a keeper!”