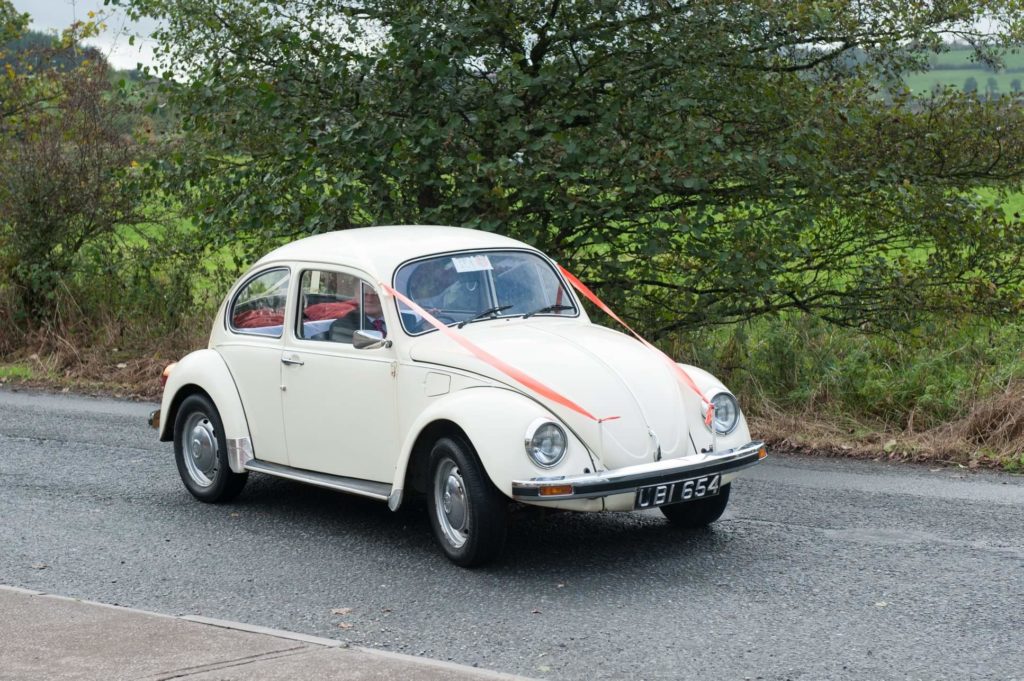 Thanks to Owen O’Reilly for adding a photo of one of the cars used at his own wedding. This Beetle was used to take the bridesmaids to the church so Owen didn’t get to talk to the owner about his pride and joy. Despite not getting to speak with the owner, Owen was able to tell us that it is a regular at shows and on the streets of Castleblayney in County Monaghan and that the owner is very proud of his Beetle, and rightly so, because it is in exceptional condition.

One of the very last Irish assembled Beetles, this Polar White (L90A) Beetle Deluxe was registered on December 7th 1978, almost a year after production finished so it may have been a ‘FOR REG’ car or perhaps it took pride of place in a dealer’s showroom for 12 months.

Just as we were about to upload this Beetle to the Beetle.ie Census we were very lucky to get to speak with the owner, Emmett Flanagan and this is his story:

Emmett told us that the Beetle was purchased new from D&S Motors in Monaghan by a retired school teacher. The teacher never left the county of Monaghan in his Beetle, only using it to go into Monaghan town when needed. Not one to be caught out by having just one spare wheel, the retired school teacher kept a second spare wheel behind the back seat. When Emmett bought the Beetle back in the early 2000s it had covered just 18,000 miles. Since taking ownership, Emmett has added another 12,000 miles to the 1200’s engine, bringing the total mileage to just over 30,000 miles which is minuscule when you think that this Beetle is 43 years old.

The Beetle still has all of its original panels, bar one wing, which reflects the low mileage and two very careful owners. Around 2014 there was a little corrosion under the battery so Emmett had that repaired and then took the opportunity to have the floor sandblasted and painted to ensure this Beetle stays on the road for many more years to come. The Beetle was also repainted in its original Polar White (L90A) so it’s looking as good as the day it left D&S Motors in Monaghan, in fact, it’s as close to looking as it did driving away from the showroom in December 1978 thanks to Emmett who has even managed to replicate an original D&S Motors rear window dealer sticker with the phone number ’67’.

It’s great to see old VWs in the hands of careful and proud owners such as Emmett and we wish him many more happy miles behind the wheel of his pride and joy.