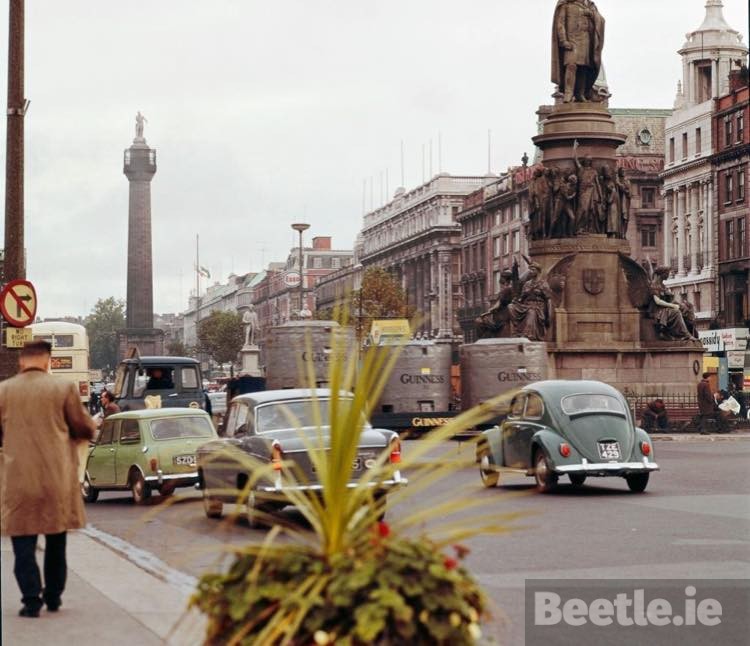 This superbly atmospheric period photograph comes to us courtesy of Partholan Joyce-Fenlon via Darren O’Rourke of the Original Irish Aircooled VW Facebook group. Thanks to both Partholan and Darren for this photo.

This Beetle was assembled in Dublin in early 1964 and was bought and registered in Dublin by its local owner in April that year. The Java Green (L518) 1200 Beetle Deluxe was captured by the photographer on O’Connell Street in Dublin, where it shared the space with many other (now classic) cars of the day, the long since destroyed 134 feet high Nelson’s Pillar, the GPO as well as a Guinness truck which was on its way to Custom House Quay where one of its cross boats was waiting to be loaded with these three tanks. Incidentally, the Guinness Fleet of ships, or as some named them, the Guinness ladies ran from 1952 to 1993. The three ships of the time this photo was taken were M.V. The Lady Patricia, M.V. The Lady Gwendolen and M.V. The Lady Grania; all named after members of the Guinness family. Finally, in January 1977 M.V. The Miranda Guinness, the world’s first specially commissioned bulk liquid carrier, made her maiden voyage from Dublin Port to Runcorn in Cheshire.

We’re not sure who to credit for the actual photo but whomever that photographer was, amateur or professional, they captured a beautiful snapshot of 1960s Dublin.