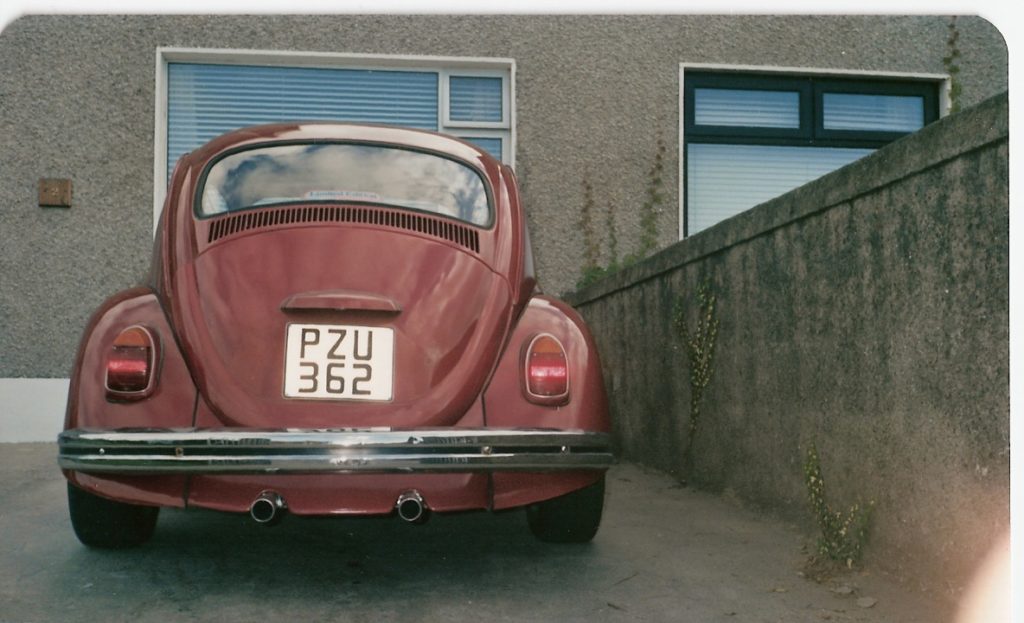 Shortly after I took this photo Andrew O’Brien who lived across from the famous Thomond Park bought it with the intention of making Limerick’s first Cal Look Beetle, and he did. Stripping the Beetle back, Andrew repaired the bodywork as needed and then went on to dechrome the bodywork, lower the suspension and colour code the engine. One piece windows, Cal Look window trim, a louvred firewall in the engine bay and chrome rims completed the exterior off just nicely. The interior had the chrome dash trim removed and Andrew upholstered the seats and door cards himself. A new T-shifter made the job of changing gears a lot easier for the young Limerick man. Andrew stripped and serviced the speedo before colour coding it to match the new maroon paint.

The front anti-roll bar was still in place when Andrew put his Beetle on the road but one day when reversing out of his parents driveway the anti-roll bar caught on the metal gate stopper, pulled it with such force that it broke free and shot towards the newly installed double glazed windows. Thankfully, the point of impact was just below the glass. After that close call Andrew decided not to refit the anti-roll bar!

Andrew was training with the ESB so on occasion would have to travel to Dublin for training. On one of these trips he had a few local lads in the car on the way to dublin. The guy in the back took off his shoes and kicked back, stretching himself across the back seat. They were all so busy chatting and laughing all the way to Dublin on that cold winters night that they failed to notice the smell of burning. It turns out that when his mate kicked back, he left his shoes in front of the heater vent at the back seat and by the time they reached Dublin they had melted and warped out of shape. The poor guy had no choice but to go out and buy a new pair of shoes the following day. Andrew was chuffed to know that his heating was working so well.

Andrew was heavily involved in getting an aircooled movement going in the Limerick/Clare area but sadly both he and his brother lost their lives in a house fire while working in Boston in the early 1990’s.

Andrew’s close friend Johnny Moore now owns PZU and has restored it over the years. It is still on the road.