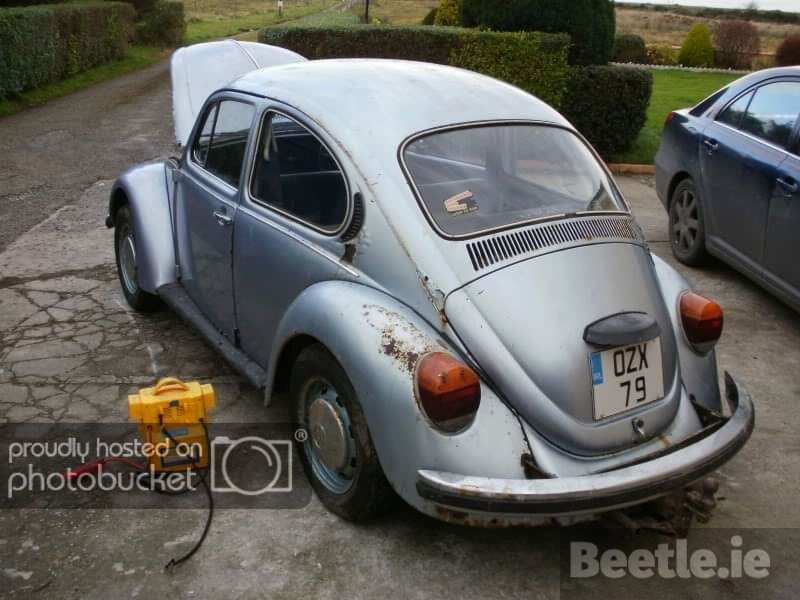 I’m not sure this is your typical Beetle.ie story, as I’d like to think the story isn’t over.

One of my earliest childhood memories from when I was being cared for by my grandparents was sitting on Grandad’s lap and having him drive us around the yard in his old 1977 Beetle. Grandad didn’t use the Beetle anymore, only with us around the yard.

We grew up, Grandad got older and the Bug stayed put.

That little Beetle was parked up for years, throughout my childhood and early teenage years. I can still picture it parked up, all sad and alone in the hay barn and I wish I had shown more interest in it back then.

When Grandad suddenly passed away in 2008, Nana was later asked what would she do with the Beetle. A lovely local man said he would fix the Beetle up and bring Nan to see it when it was completed. So off the Blue Metallic Bug went on its new adventure. Perhaps the first time it left the shed in 10 years.

Life prevented our lovely friend from fixing the Bug, it never came back to visit and Nan passed away in 2012.

Now at 24 years of age, and my brother at 21, our lives revolve around cars. So in May of this year, after many previous talks of doing so, I started the search for Grandad’s old Beetle.

I started with the brilliant Eircooled Facebook Group and posted asking if the story rang a bell with anyone. My aunt was able to find a photo and we got the reg. (Main Photo) The car was just out of NCT.

In searches like this, I am so grateful to be Irish and have such a helpful community of car enthusiasts. The story of a lovely man collecting a Beetle that never got restored did indeed ring a bell.

I spoke (all through ‘Eircooled’) with different folks about Grandad’s Beetle. So many well-wishers, hoping that my family can be reunited with the Bug.

I spoke with a couple of gents who had in fact been to my Grandparents’ farm years before my time to look at Grandad’s other Beetles, a man who had worked on their house and remembered such lovely details of Nan and of course the story of where the Bug went. I had so much help trying to piece together the story. This time reminiscing and discussing was so heartwarming and a nice way to spend some of the Covid-19 lockdowns.

Through this search, I was sent photos of the Beetle which exist only on the back end of the internet. I imagine these photos were from when our lovely man was maybe selling the Beetle again, after life got in the way. These are the last photos of Grandad’s Beetle that I have.

This is the end of the story so far, but I hope that maybe writing about this story will help us to bring Grandad’s Beetle home to our family where it will be cherished by all.

If the person who owns the Beetle now ever decides to sell it, I will buy it back, no matter the condition. I’ve made a promise to myself that one of the things I must do in life is to own Grandad’s Bug and bring it to visit him and Nan.

I appreciate being able to share this story and a huge thank you to all on Facebook, Eircooled and Beetle.ie for helping in my search for Grandad’s Beetle.

Beetle.ie: We really hope you find your grandad’s old Beetle. From our records we can see that your grandad’s old Beetle was assembled in Dublin and was finished in Miami Blue (L51C) originally and came with a 1200cc engine. It was then sent to Divane’s VW dealership in Castleisland, County Kerry where it was sold from. It was first registered on April 5th 1977. At some point in its life it was repainted metallic blue. If you have any other photos please send them on and we will add them to your listing here and they may jog someone’s memory. You can email them to cathal@beetle.ie or trev@beetle.ie

Best of luck with your search Susan!