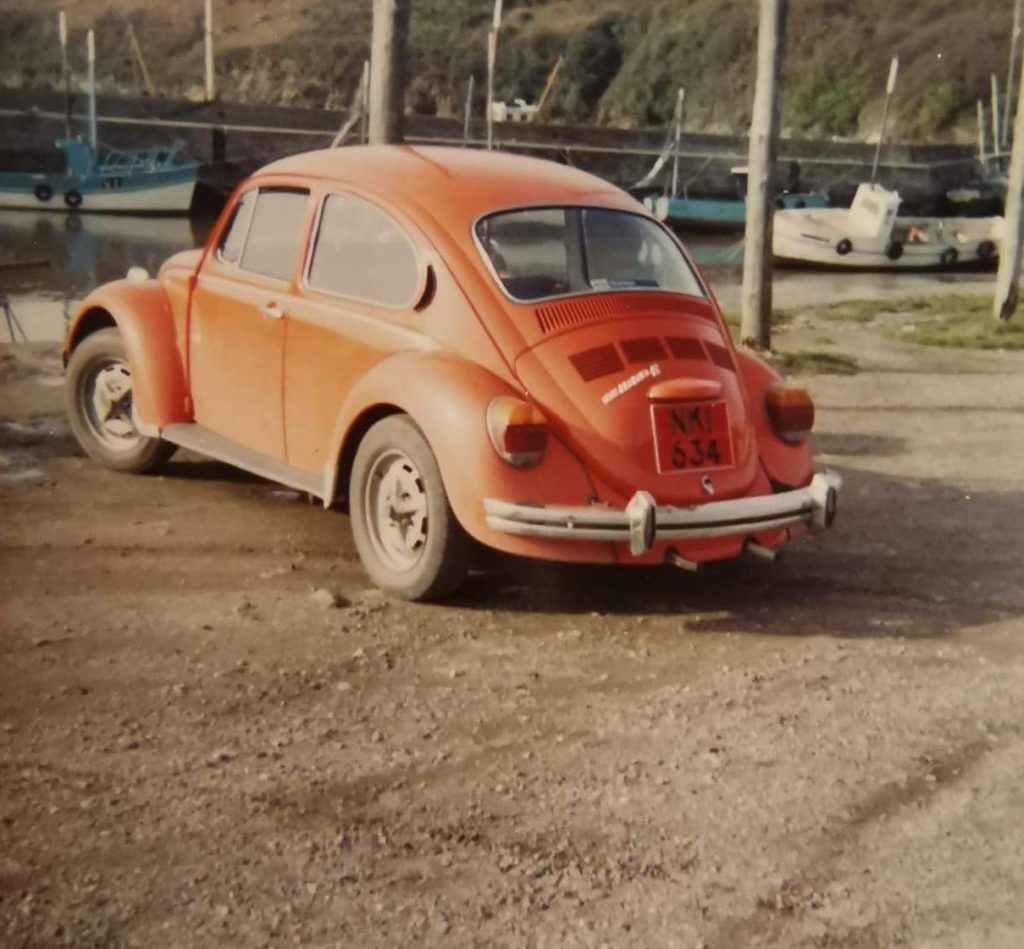 I love when I receive an email, a phone call or as in this case, a message through facebook to tell me about a long lost VW. With over 75,000 VWs registered here in Ireland from 1950 through to 1977, we are barely scratching the surface when it comes to our census on Beetle.ie but what we do have are some amazing stories that have ignited the passion for vintage VWs in some while others have been able to relive some very special moments in life as they recount the stories behind their photos. For that we thank you all so much for submitting your stories and photos and we look forward to continuing the research.

This particular Beetle is a special one, not only to the owner because it holds very fond memories but it’s special in its own right too because this is a Special Edition beetle, a 1300S Beetle or Power Pack Beetle as it was known in Ireland. Special edition Beetles were either supplied directly to Ireland fully built or as CKD (Complete Knock Down) meaning they were built in our Dublin factory using parts sent directly to Ireland from Germany, with a percentage being sourced locally to satisfy the taxman! All of the 1300S Beetles were built in Belgium and arrived at Dublin docks as fully built cars. They must have been built to an exceptionally high standard because of the 300 1300S Beetles imported into Ireland, quite a large number have survived to this day with many more making it into the late 1990’s and early 2000’s which is pretty impressive.

NKI634 was one of these 300 1300S Beetles that landed in Ireland in January 1973. We can only assume that it, like many other 1300S Beetles, was sold before it even arrived to the dealer in Waterford, such was the demand for these very special and limited run Beetles because it was registered in January 1973.

The photos accompanying this entry were taken by Phyllis O’Brien and her new husband as they enjoyed their honeymoon in the west of Ireland back in June 1976. The Beetle was three years old but still looked very straight and didn’t appear to have suffered any damage in its young life. Prior to owning this Beetle the the soon to be wed couple drove around in another Waterford registered Beetle, a 1968 Beetle with the registration GKI-886 to be exact. As nice as their 1968 Beetle may have been the difference in their 1200 Beetle compared to this more powerful and far superior 1300S Beetle must have been quite something. For one, there was a punchy 1600cc engine that was mated to a higher ratio gearbox, a heated rear window, padded dashboard, disc brakes and of course the sports wheels and bright orange paintwork that helped this 1300S Beetle stand out from the crowd. The O’Brien’s 1300S / Power Pack Beetle also stood out from the sea of Beetles thanks to some choice accessories such as front and rear stone guards as well as front and rear bumper over-riders.

Sadly this 1300S was not one of those that made it into the 2000’s and we are not sure if it even made it into the 1990’s as it is not listed on the digitised register which means it was not on the road in 1993 and has not surfaced since. Wouldn’t it be nice to think it’s sitting in a dry garage and is about to be discovered very soon? I know, but what’s life like without some dreams and fantasy eh?

UPDATE 16/1/20: Phyllis has been in touch to say that they bought their 1300S from Tom Murphy Motors, Cork Road, Waterford in 1976 and it only had 25k miles on it. Tom Murphy’s later moved to The Glen in Waterford.