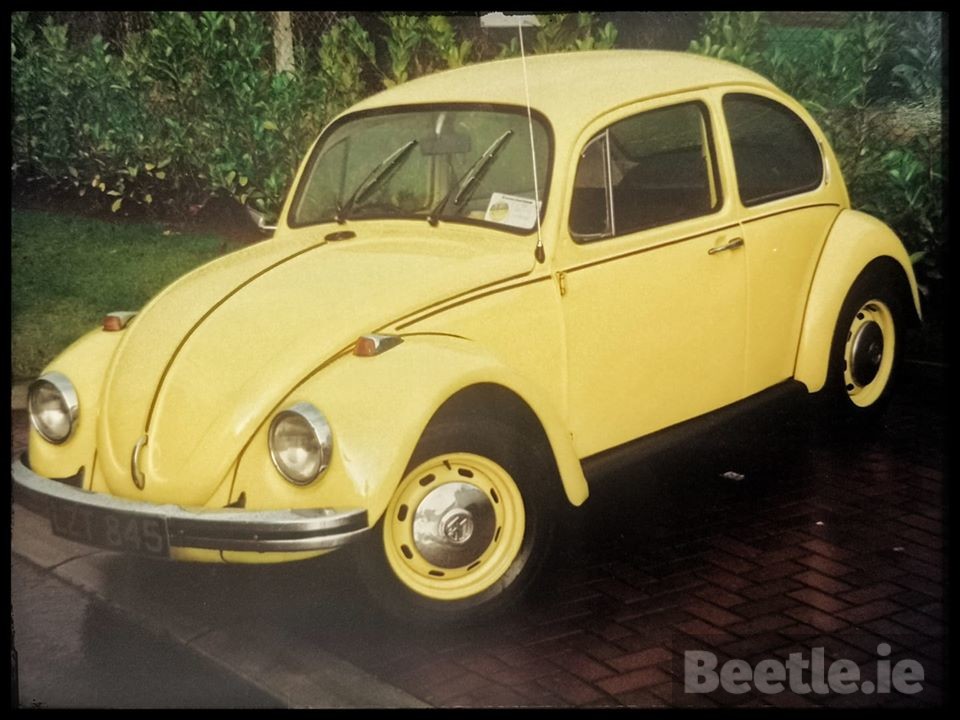 This is a story that involves Roger O’Sullivan, Padraic Bolger, a 1972 Texas Yellow 1200 Beetle and the Original Irish Aircooled VW Facebook page.

Assembled in May 1972 in MDL, on the Naas Road in Dublin, this 1200 Beetle Deluxe was sent to The Service Garage in Limerick to be sold. The Brilliant Orange (L20B) Beetle was sold at the beginning of June 1972 to its first owner who was based in County Cork, hence the Cork registration.

Roger O’Sullivan saw and photographed the Beetle parked up in Brookfield Village in Cork back in the early 1990s. As you can see that by the time Roger saw this Beetle it had seen the inside of a paint booth and was now yellow. The wheels had also been painted yellow, while the chrome body trim and VW bonnet badge had been painted black.

Fast forward to the early 2000s and Padraic Bolger in Kilkenny had bought LZT 845.

Padraic: “I bought it from guy in Cork, around the Glanmire area. It wasn’t in the best shape when I got it back then. It wasn’t running or driving and it was rusty! I drove it for a few years. My sister Aoife drove it for a while in 2004 also. It was way too bad to restore so it ended up as yard art for few years before the body got scrapped. I still have chassis and logbook with the intention one day of refitting a replacement bodyshell.

I’ve owned a good few VWs over the years but this one has great memories, laughs etc.
One story is from the time I brought it on a vintage charity run. There were hundreds of immaculate vintage cars about. I rocked up in this, rope hanging off it etc. Anyway, I parked it up and an older guy was watching me park it up and strolled over. I jumped out and he said…. “well its running well anyway”

It was bad when I got it. I remember going to see it with my wife who didn’t even get out of the van it looked that bad. Half an hour later I sat back in and she said “well, you’re not buying that then I take it?” Erm yes, I just did! Her response was short and loud …”WHAT???”

I bought a ton of parts and had planned to have it done, but it was patched for many years previous and when I dug into it, it was too far gone to be anyway economical. I bought another Bug then but always kept this with intention of reshelling it. Someday!”

Roger posted his photo that he took in Cork back in the early 1990s on the Original Irish Aircooled VW Facebook page which is when Padraic saw it as he perused Facebook one night. Padraic recognised his Beetle and then replied to Roger’s post to say that this was in fact his Beetle but the photo was taken before he bought it.

Every old aircooled Volkswagen holds some history so even if you’re not looking for it, it finds you! Thanks to Roger O’Sullivan, Padraic Bolger and Darren O’Rourke of the Original Irish Aircooled VW page for this multi level story.

Now all we have to do is try to encourage Padraic to source a good bodyshell and begin the restoration of LZT 845!!!!!