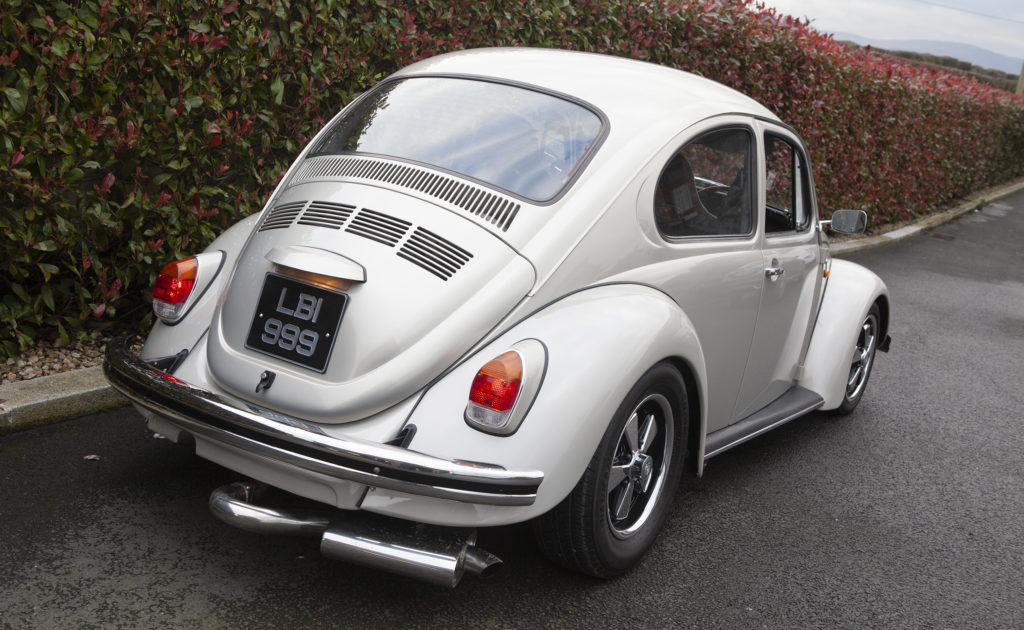 Despite being nearly 50 years old, this Beetle stands makes quite a statement. Funnily enough, back in 1974 when this Beetle was new, it even stood out from the crowd.

Back in early 1974, a County Monaghan fireman fancied a new Beetle but he wanted a little more power than the standard 1200cc engine that the majority of Irish people ordered so he opted for the 1300cc model. He ordered it in Rally Yellow (L10A) and as if his bright yellow 1300cc Beetle wasn’t going to stand out enough, he ordered a special registration number to match his profession as a fireman, LBI 999. Pretty cool back story eh?

Fast forward a number of years from when this Beetle was registered in April 1974 and LBI 999 had not only gone through a number of owners but it had gone downhill in terms of its condition. So bad was the body that it was deemed too far gone to restore but in order to save this Beetle’s history, the chassis was retained, restored and a donor body was sourced. The body was sourced from a Mexican Beetle which was rust free so only needed a repaint. The 1300cc engine was smoking which was ironic seeing as it was an ex fireman’s Beetle, but this meant that it was time for an engine upgrade. The donor Mexican Beetle also offered up the 1600cc fuel injected engine.

Fast forward another few years and LBI 999 is now in the hands of Paul Twibill. Paul decided to personalise his Beetle by adding some choice extras which not only make his Beetle stand out from the crowd (just as our fireman wanted) but also they also make it a lot more fun to drive.

First off, Paul lowered the suspension, fitted Porsche wheels, stainless steel bumpers and headlight rims, stainless door mirrors and stainless wipers. Hanging off the back of the 1600 fuel injected engine is a stainless steel Fat Boy exhaust so you’ll hear LBI 999 coming down the road even if you don’t see it!

Paul didn’t forget the interior either with a pair of custom Recaro seats and a Flat 4 steering wheel. LBI 999 can stop just as quickly as it can take off thanks to the front disc brake conversion.

I think our Monghan fireman would be very happy to know that LBI 999 is still a unique and eye catching Beetle even after all these years!