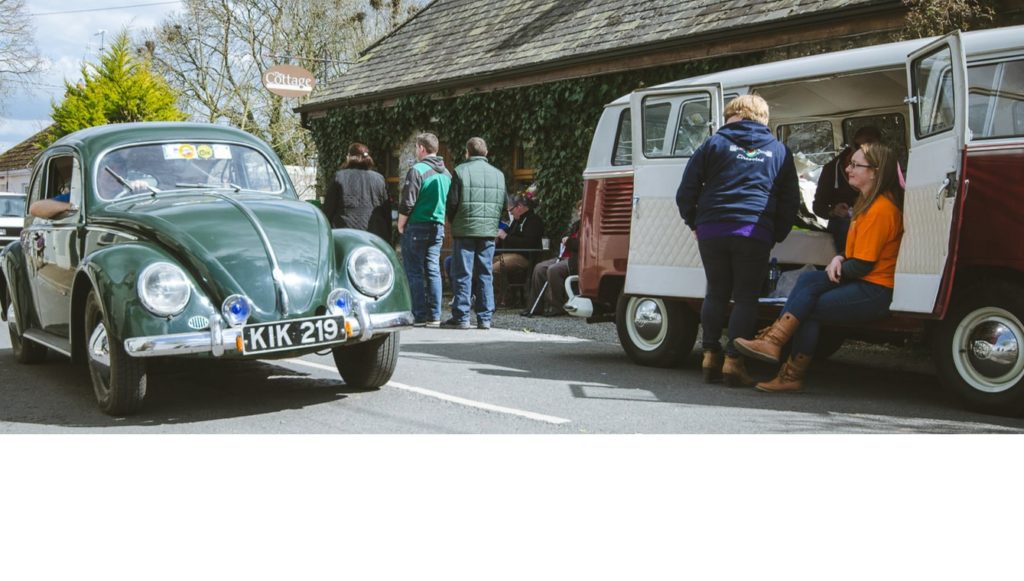 Every entry on the Beetle.ie Census is important but we love to mark the occasions when we notch up another 100 aircooled VWs and I was looking forward to uploading this 1956 Oval Window Beetle for a long time. If you’ve been in the VW scene for any length of time between the early 1980s right up to the current day you will have seen this great survivor Volkswagen. Let’s find out more about Entry # 800 on the Beetle.ie Census!

Whether you are new to the VW scene or a long time VW enthusiast who can tell the difference between Hearts Elephant’s Feet, you can see that this Beetle is not your average late 1970s Beetle. It looks older, despite the overall shape remaining the same since the 1930s. Maybe it’s the blade bumpers, the smaller windscreen or bonnet crest that help to add to this Beetle’s vintage look but once you step around the back you are left in no doubt that this is one very old Beetle. The Oval Window Beetle was the first visual ‘modernising’ of the Beetle in the 1950s when the decision was made to increase rear visibility by removing the split rear window and replacing that with an oval window in 1953. It wasn’t a huge increase but it did help.

John Laheen has owned this Oval Window Beetle for many years, almost 40 years if he were to count. John recalls; “I have always had Beetles in my life, either from when my uncle had one, a 1958 Beetle with a PIK registration or when myself and my wife went on our honeymoon through Europe in my 1967 Beetle so it would be weird not to have one in the garage. I bought my Beetle in 1982 on a 50/50 basis with my friend Robbie Smyth but of course we weren’t the first owners, that honour fell to Garda Michael O’Reilly who was based at Garda HQ. Garda O’Reilly lived quite close to Phoenix Park so the mileage was kept quite low during his ownership. After Garda O’Reilly decided to sell KIK 219, Garda Andrew Sharkey became the second owner but he never really used the Beetle as he had more interest in motorcycles and a few years later the Beetle was offered for sale”. The next owners in Skreen did not register for road use and so when they offered the Beetle for sale, Beetle crazy pals John and Robbie stepped in to buy KIK 219 and became only the third registered owners of a Beetle that was now pushing close to 30 years of age.

The Beetle had just 72,394 miles when VeeDub enthusiasts John and Robbie drove it home. What is interesting is that the original engine had been changed in 1956 to one of a similar vintage and this was noted on the taxbook. John doesn’t know why this happened but if it was changed within its first year then we can only assume it was done under warranty.

When John got the Beetle home to its new (and current) home in Leixlip in 1982 it was enjoyed on a regular basis but time was starting to take its toll on the Oval Window Beetle so it was treated to new wings and some preservation in the late 1980’s. By 2003 it was once again showing some battle scars so it was given a more comprehensive respray including new window rubbers etc.

The Beetle is truly part of John’s family life and history now that he became sole owner when Robbie bought another Beetle of his own. KIK 219 has been used for and by the next generation of Laheen’s as a wedding car in 2017. Prior to the wedding it was treated to new door cards and seat upholstery and it was during the seat restoration that a cardboard label with Dec 1955 on it was discovered and reinserted. Having owned the Beetle since 1982 John has brought his Oval to numerous shows from the very first one he attended which was the Howth Rally in 1982, to the Kilcommon Festival in Tipperary, right the way up to current shows such as Jumpstart in Tipperary. The current mileage is only in the mid eighties and is correct but I’m sure John will enjoy getting his Beetle to click over the magical 100k miles at some point!

Beetle.ie: We’ve done some research and we can see that John’s Oval Window Beetle was assembled in MDL on the Naas Road in Dublin, less than 6 years since the first Beetles were assembled in Ireland so still a relatively new marque and new model on the Irish roads. The 1200 Beetle Deluxe was finished in Jungle Green (L315) before it was sent to Sheane’s VW dealership in Wicklow to be sold. Garda O’Reilly bought his new Beetle in Wicklow but registered it to his home address in Dublin, hence the IK registration. All of this happened in April 1956

Thank you John for allowing us to feature your beautiful Oval Window Beetle. It was our honour and pleasure to have it as Entry Number 800 on the Beetle.ie Census. We wish you many more happy miles behind the wheel and we look forward to seeing it at the next classic car show.