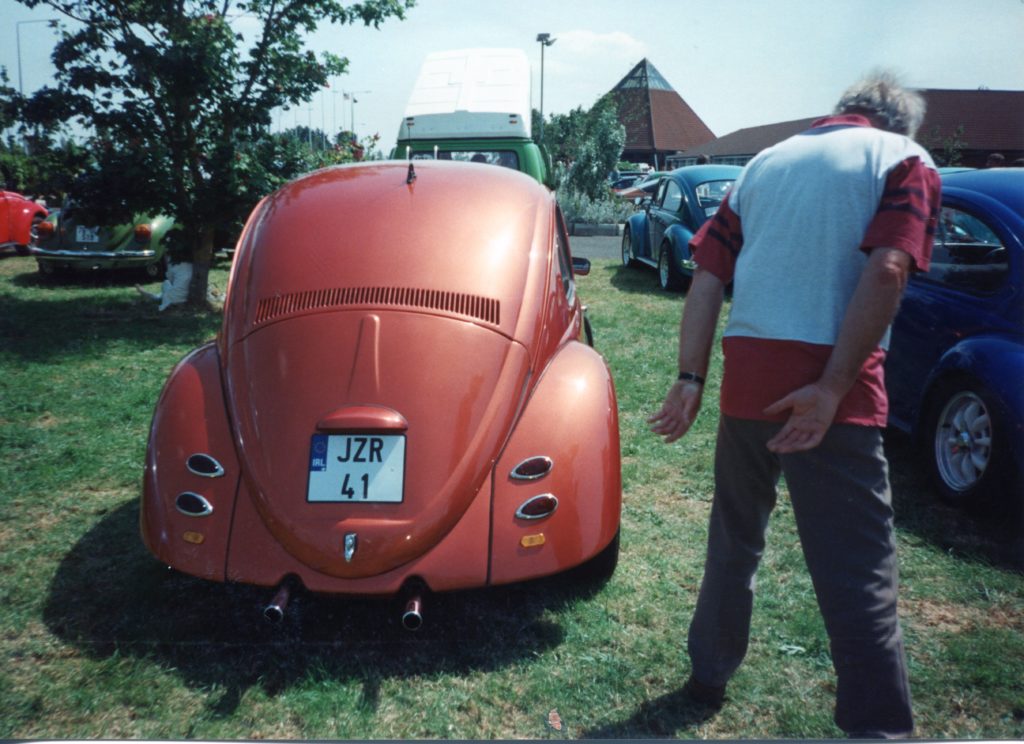 A huge amount of time, thought and effort went into building this custom Beetle back in the 1990’s but it seemed to disappear from the VW scene just as quickly as it arrived. It certainly confused a lot of the show goers at the famous Beetles Reunion in the Two Mile Inn just outside Limerick city. Some were overheard saying that this was a factory option! All we know is that this Beetle looks nothing like it did when it was sold new from Leacy’s VW Dealership Wexford back in November 1976.

For one it was Lofoten Green and it was a 1200N or Base Model Beetle so it couldn’t have looked any less like it did when we snapped it at the Beetles Reunion! Since leaving Leacy’s in November 1976 it was lowered, Centreline wheels fitted, earlier wings & engine lid and of course the obvious custom work before a beautiful coat of metallic orange was applied. As I said, with such work having gone into this unique Beetle it’s funny that it simply vanished. Maybe it’s sitting in a shed or garage somewhere. If anyone can throw some light on what happened to this Beetle we would love to hear all about it or even see some ‘now’ photos.

UPDATE 05-11-19: We received an email overnight form Emilio regarding this Beetle and it went as follows: “This Beetle was brought into Emilio’s Beetles in 1998 but after careful consideration by the team here, we made the decision to dismantle the body, saving what good parts we could to go on and help keep more Beetles on the road. The poor condition of the body meant that it would not have been a viable candidate for restoration. It happens sometimes but nothing goes to waste at Emilio’s Beetles and as such the chassis is still here so once a good body is found JZR 41 will live to fight another day.”