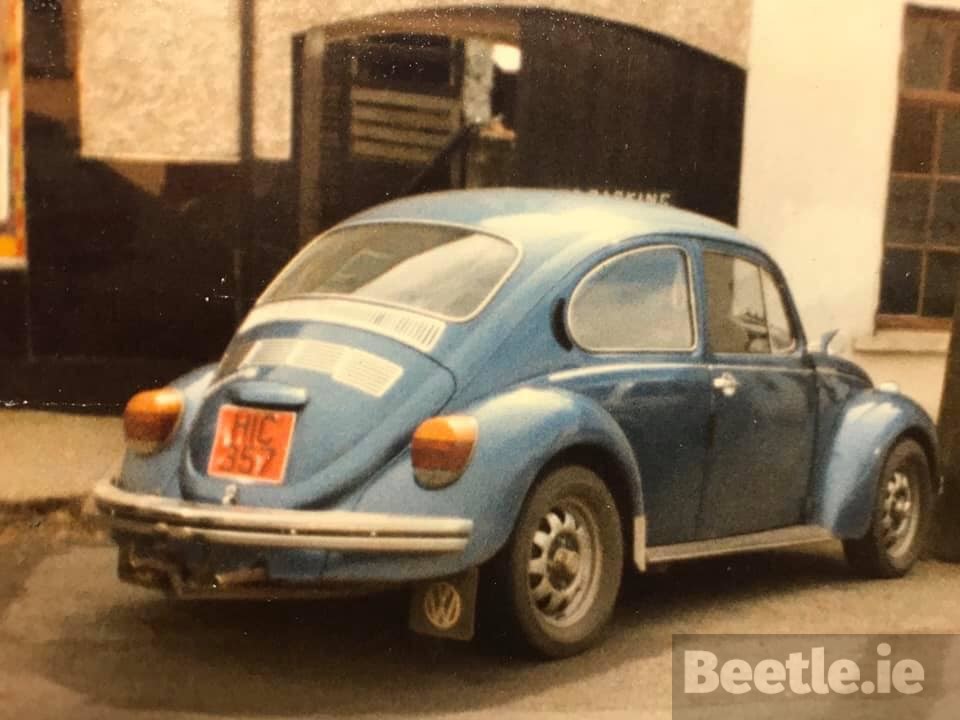 In the 1970’s certain models were built outside Ireland and imported as fully built models. This 1303S Beetle was one such model. It was finished in Alaska Blue Metallic (L96B) which was a colour normally used on Type 3 VWs but one that works exceptionally well on a Beetle, especially the curvier shape of a 1303.

It was delivered to Ireland in early 1973 and once processed at MDL on the Naas Road it was loaded onto a truck and delivered to Sheehy Bros in Carlow. It was then sold and registered on May 1st 1973 and given its ‘IC’ Carlow registration.

When Pat took this photo this 1303S was wearing Marathon wheels which were complete with the very rare and therefore hard to find centre caps. Were these ordered from new or added in Sheehy’s? We don’t know as they could have been added by the owner at a later stage but no matter when they were added they certainly suited the look of this 1303S.

Other extras fitted to this Beetle include rear window vent trim, engine lid vent trim, finger plates, stone guards on the front and rear wings as well as a set of VW logo mudflaps. All of which works perfectly against the metallic paint. Whoever owned the Beetle made use of the extra pulling power from the 1600cc engine by fitting a towbar.

Sadly nothing else is known of this Beetle’s history but at least it’s another one for the Beetle.ie register.

UPDATE 12-10-2020: We have an update on the story of this 1303 thanks to Emilio’s Beetles: “HIC 357 was bought by Emilio’s Beetles back in 2001. The body was removed and the chassis was put into storage while the body and drivetrain went on to keep other Beetles on the road. For example, the front end of the bodyshell was used to repair another 1303 while the rear section of the bodyshell was used to repair a Beetle that had rear end damage following a collision and the engine was used to power another Beetle. The chassis remained in stock at Emilio’s Beetles since 2001 but it has recently been sold to a customer who has a 1303 body but no chassis so HIC 357 lives on in many guises.”