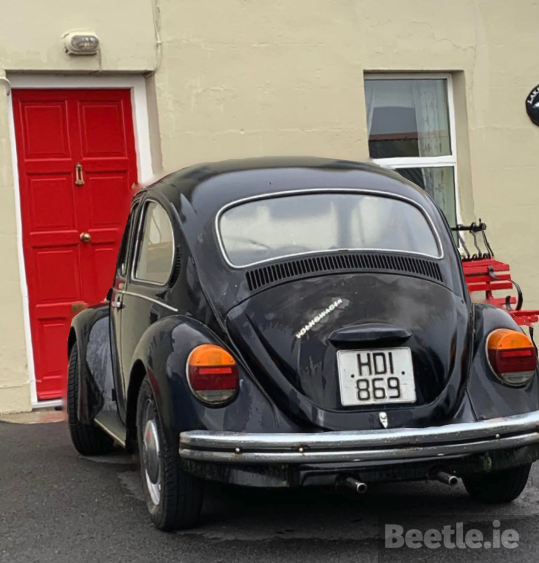 Thanks to Ian McDonnell from the Eircooled Car Club Facebook group for submitting this Beetle that he spotted while out on his daily travels. Ian commented “I saw this VW Outside a house in Roscommon today. Rossie reg and all. Just class. Great nick.”

It looks great, especially as so few late models were finished in black. It’s a late 1970 build and has some of the features of a 1971 model like the rear crescent vents. The ‘Elephants Feet’ rear lamps are obviously not correct for the car but were more than likely at at time when some restoration was done.

This Beetle is an Irish assembled and once it had successfully completed the quality control check in MDL it was sent to Fullard’s of Roscommon town. It was from this main dealer that the Black (L41) Beetle was sold to its first owner. That owner was based in Roscommon so when this 1200 Beetle Deluxe was registered on December 30th 1970, it was given the Roscommon registration series HDI. Incidentally, this was one of four Black (L41) Beetles sent to Fullard’s in December 1970.