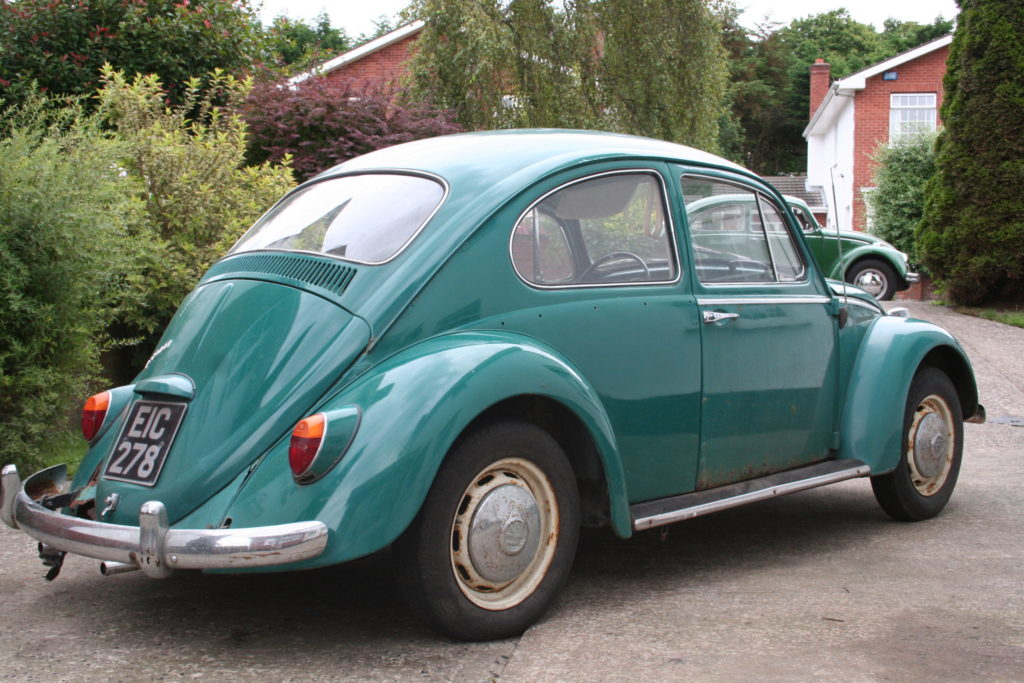 (a) Country of origin:
Sweden

I saw this one advertised on DoneDeal in 2013. I hadn’t planned on buying another Beetle but when I saw it I knew there was more to it than just a Beetle for sale.

The ad said “1966 Beetle, ex-Swedish embassy, LHD.” which grabbed my attention so I looked a bit closer at the photos and it didn’t look too bad at all. The car was in Galway and I knew there would be interest in it so I ’phoned the seller right away. He gave me some information on the condition, how long he had owned it and explained why it was up for sale.

There were some rust issues, but then what would you expect from a Beetle made in 1966? The Java Green colour is original to the car but the paintwork on the outside is not original so was painted at least once, but everywhere else it’s just as it left the factory. The cloth upholstery is in quite good condition. In fact, I’d go so far as to say it is in excellent condition, apart from the driver’s seat back rest, which has frayed over the years. The carpets are tired and threadbare in places, and oddly, the carpet covering the heater channels has been removed or maybe it disintegrated?.

There are a few accessories that came with it from new like the factory-fitted tow bar, Philips radio and a Huf steering lock. The latter is especially nice as it still works using the original Huf key.

What really sold it to me though is its history. It did came with some receipts which has allowed me to contact one of the previous owners but the thing I love is the ‘CD/Corps Diplomatique’ sign on the front. This was given to all embassy staff, or persons with diplomatic immunity. The Beetle was imported into Ireland from Sweden in 1970 by a Mrs. Ulrika Theape-Fugard whom I have tried to find on t’interweb but all I have found is that she was an advocate of women’s rights and wrote many pieces on this. The address on the old brown logbook where it was registered first was in Carlow and then it changed in 1972, but the owner remained the same. Both addresses are local deaneries, or rectories, as opposed to an embassy. I found some old invoices in the car, one had a ’phone number on it and when I called I spoke to a man who ran a garage in Sligo for many years. He told me that the car was driven by Ulrika’s husband, a Swedish vicar, but he wasn’t sure whether it was him or Ulrika who had the diplomatic status. He was able to tell me that he took the ’66 as a trade-in against a new Polo in 1979, then stored the Beetle in his shed for 20 years – he said he kept it as it was so unusual, even then, to see the extras that are fitted to it. He sold his garage business and the Beetle then went to Donegal before ending up in Galway where I bought it. It turns out the guy I bought it from had bought it for his Dad but he had sadly passed away before he could restore it.

Before I sold it to VW nut Peter Murphy in Galway, I had the engine recommissioned, brakes sorted and a NOS rear valance welded in by CustomVolkz in Kilkenny. The 1300 engine is a sweet little runner and fires up on the first turn of the key which is always nice.