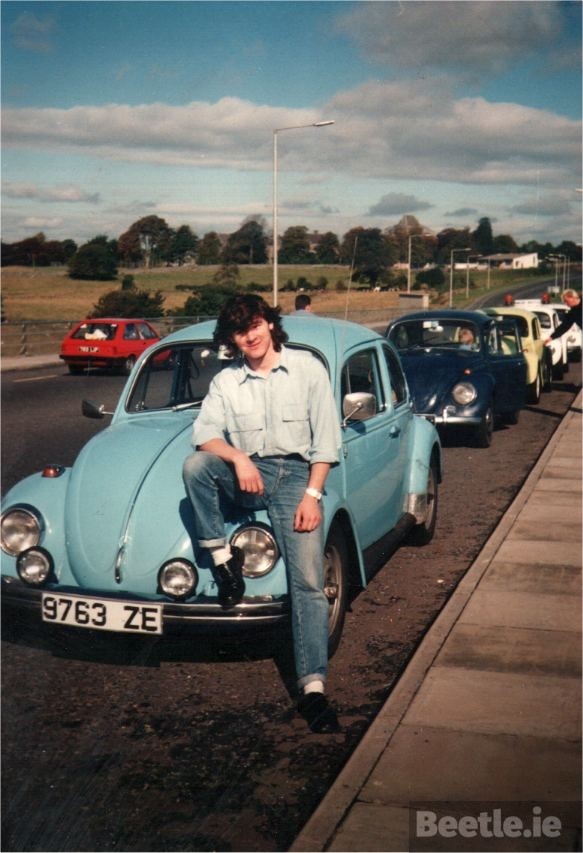 This is a story of two Beetles really; a Kerry registered Beetle and this Marathon Beetle.

The first one was a 1972 Kerry registered Beetle (XIN 636) that Mr Raftery bought in 1978 and used it to take him to work on the docks in Dublin. Being by the sea, the salt air was never going to be a good thing for his Beetle and by 1983 it was clear the end was near for XIN as it had slowly dissolved over the years.

The hunt began for a replacement and he managed to find this 1972 Marathon Beetle advertised for sale in North Dublin. While looking at the Marathon Beetle, both Mr Raftery and his son Brian were trying to play it cool, not giving much away in front of the seller when all of sudden they heard a loud bang and looked around to see the battery had fallen through the rotten floor of XIN onto the ground. Mr Raftery casually turned to the seller and looking at the Marathon Beetle said “we’ll take it!” and with that, £400 was given to the seller in exchange for the keys and the taxbook to 9763 ZE

Fast forward to 1989 or early 1990 and Mr Raftery was tired of having to repair his Marathon Beetle which was getting a little tired in terms of rust and also mechanically so he decided to trade it in for another car. Brian was coming of motoring age and was Beetle crazy (as he still is today) so asked his dad if he could buy the car from him. Mr Raftery said yes, so long as he gave him what he paid for it he could have it, so once more, another £400 was exchanged and the Beetle changed hands but not address.

Being Brian’s first car it, like so many other Beetles that were driven by first time drivers, was crashed, banged and walloped more than once in the year that he drove it. The first few ‘incidents’ weren’t too too bad at all, in fact, they were the usual bumps and scrapes all of us had when we got behind the wheel for the first time but the final nail in the coffin for this Marathon Beetle happened on a weekend away with his friends. It was enough for the insurance company to declare it a write-off, although, in reality, this wasn’t the case as it could have easily have been repaired.

The story of the second crash goes that a college hiking trip had been organised in the Wicklow Mountains by their college chaplain. Of course Brian drove his Beetle instead of getting the bus with the rest of the students. On the last day, the students were to get a bus back to Dublin but their bags were back at the hostel at the top of the hill so Brian said he would drive there, get the bags and deliver them back to the bus stop before he would drive back to Dublin himself. All was going to plan until he happened upon a car coming in the opposite direction as he drove back down the hill on a long boreen. Brian’s Beetle was crammed full of his college mates’ bags so between that, gravity and the fact that he was probably driving too fast for the poor old drum brakes to handle. He couldn’t stop on time and slid towards the brand new new car and clipped the side of it, pulling its front wheel off while Brian’s Beetle ended up in the ditch. The driver of the new car got out and to Brian’s shock and horror it was the college chaplain who had organised the hiking weekend! A local farmer was called and once Brian’s Beetle was pulled from the ditch he fired it up and was able to drive home, albeit with a very bent axle and damaged bodywork. As for the college chaplain, well, he had to wait to be towed back to the university!

So bad was the bend in the axle that Brian wobbled and swerved all the way home. At one of the traffic lights on the N11, a man got out of a branded T25 that pulled up alongside Brian and gave him a 10% discount card for his VW parts business saying “I think you might need some parts”. As the van pulled away Brian could see that it said German Autoparts on the side of the T25. German Autoparts were based in Bray, County Wicklow and specialised in the supply of parts for aircooled VWs. When he saw Brian’s battered and bruised Beetle he must have thought all of his Christmases came together!

Brian had planned on restoring his Marathon Beetle but being a poor student at the time, the Beetle ended up sitting in his parents’ garage until eventually, in 1993, Brian realised it was never going to happen and offered it up for sale for £85. Emilio’s Beetles bought the Marathon Beetle and saved it from the scrapheap. We believe the Marathon Beetle is stored at Emilio’s and is waiting for its day to come, and knowing Emilio, this Beetle will receive a full restoration one day so watch this space!

Brian is still passionate about VWs to this very day and rotates his aircooled driving between his 1973 Beetle and his Bay Window Camper. He’s also the head honcho of Ireland’s largest aircooled Volkswagen club, Eircooled.com

I’ll leave the last word to Brian: “The photo of 9763ZE beside the tent was taken in France in 1987 when all six of us travelled there, complete with all that stuff strapped to the roof rack. We were maxed out at about 35 mph on the motorways. The other photos were taken when I owned it and were taken on the drive down to Trill on the Hill in Waterford in 1990 with my old club The Volkswagen Owners Club of Ireland. That Beetle had the Marathon rims and the hard to find centre caps too.”