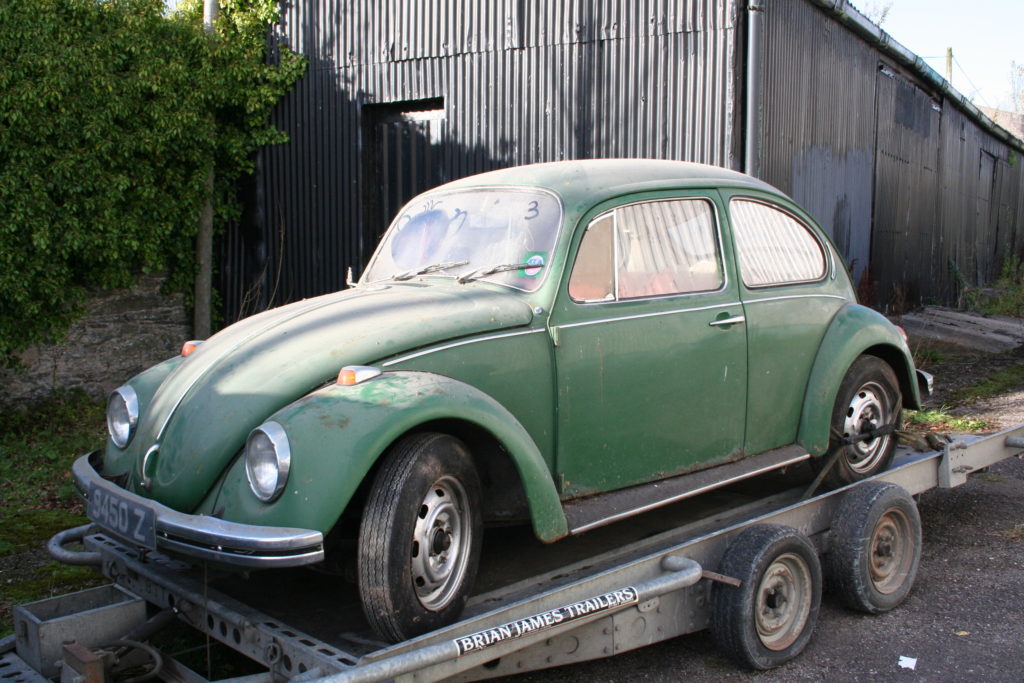 This 1971 Beetle was first registered to VW of Ireland as part of their lease programme. All Beetles on this programme would have been returned after 12 months and they were then offered for sale to both staff as well as the motor trade dealers. 9450 Z was sold to the father of an employee in MDL and was used sparingly, which was evident in the fantastic condition of the interior.

This owner kept the car in excellent condition, garaged and serviced before selling it to Wayne McCarthy, a well known VW enthusiast in Fermoy around 1991. The 1971 Beetle stayed untouched in Wayne’s garage for 20yrs before I (Cathal O’Toole) bought it in 2011. Despite having frozen brakes, as you would expect after sitting for so long, they freed up with a few ‘gentle’ taps of the sledge and she was free once more. My friends Brian and Graham loaded up their trailer and we headed for Graham’s barn where it would be brought back to life. The decision was made to try and get this Z car back to life without disturbing its heritage and history. The rust, the flaking paint, the little notes in the glovebox all told the story of this car and we wanted to save them all. The interior was the best I had seen in many years. I couldn’t believe how bright and fresh it was when I cleaned it which further backed up the low mileage of less than 50k miles.

This Beetle provided reliable and fun service in my time but as I was running short on space I needed to find a new home for this ex Volkswagen of Ireland Beetle. A really nice couple from Kilkenny came to look at the Beetle and decided this was the car for them, so they drove it up onto their trailer and took it off to Kilkenny.

UPDATE 9-5-2022: The photo of it at a show was taken by Barry Warren on Sunday May 8th 2022 and shows the Beetle, still in its survivor condition thankfully but being used and enjoyed.