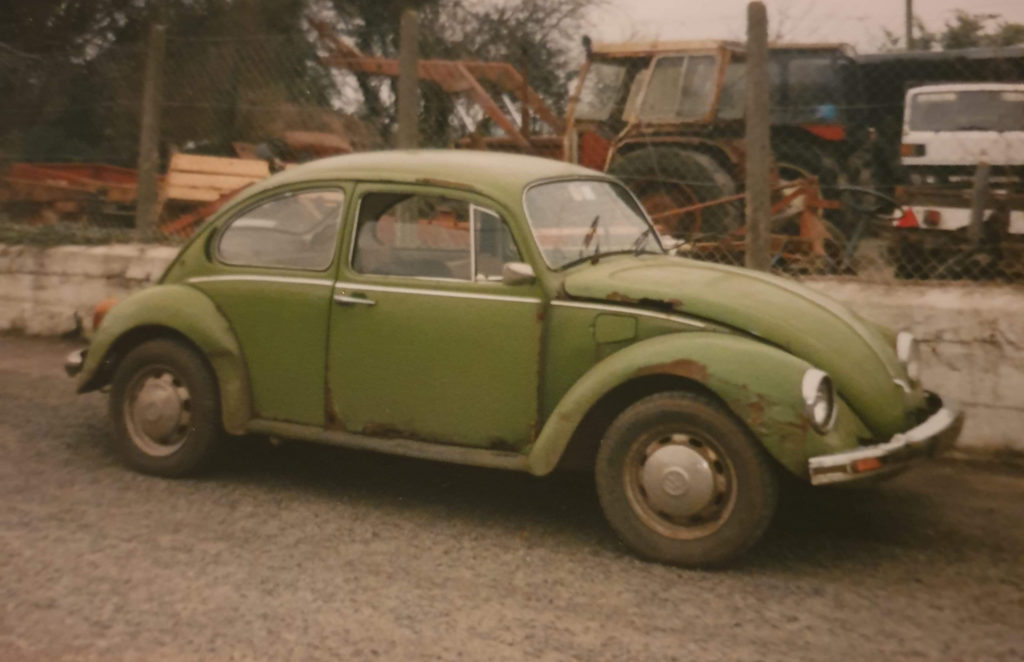 Anyone who knows me knows I’m a sucker for Lofoten Green Late Model Beetles. The colour is brilliantly 1970s and comes alive when the sun hits it, provided of course that it’s not faded like this poor old 1976 1200 Beetle. I have a Lofoten Green Beetle on my wish list and I live in hope I will find an original one in the not too distant future.

Built in December 1975, to 1976 specification, at the VW factory in Dublin this 1200 Beetle was then delivered to Maxwell’s in Athy. What we do know is that the first owner was from Tipperary but what we don’t know is whether the Beetle was bought directly from Maxwell’s or whether it found its way to a Tipperary dealership through an inter-garage deal. Either way, it was registered in Tipperary (South) on January 8th 1976 and put to work.

You can look at these photos in two ways, with the first being that the photos are of a sad looking rusty and neglected Beetle or you can look at it the way that I like to view it and that they capture the durability and longevity of the workhorse that was the aircooled Beetle. The body may have seen better days and there was no front seat base but the owner had it in the garage for repairs to keep it going for as long as he could. There was a time when the Irish towns and villages were filled with old Beetles working hard every day and this would have been one of thousands like it.

Mark Tynan from Tipperary took these photos as a teenager so I think it best to let Mark tell you the story behind this well worn Beetle.

“Hi Cathal. I took that photos myself. I imagine it was around 1995 or so. The photos were taken outside my grandfather’s garage in Ballagh, Co.Tipperary (near Thurles)

The Beetle was still in use at that stage, but not for much longer after that. A local farmer had it & his sister had a Mk1 Fiesta that she used for a couple of weeks every year when she came home to visit. Eventually Paddy started driving that when the Beetle got too shook.

I was working in the garage on school holidays back then & remember driving it back to his house after repairs were done on it. It was in bad shape even then, plenty of rust everywhere but it still ran well. The brakes were pretty non existent though! The seat back & frame were there but the base had disintegrated so Paddy dropped a plastic crate where the seat base once was. He had a cushion on it so it wasn’t too painful to drive.”

Thanks for sharing these photos and stories Mark.