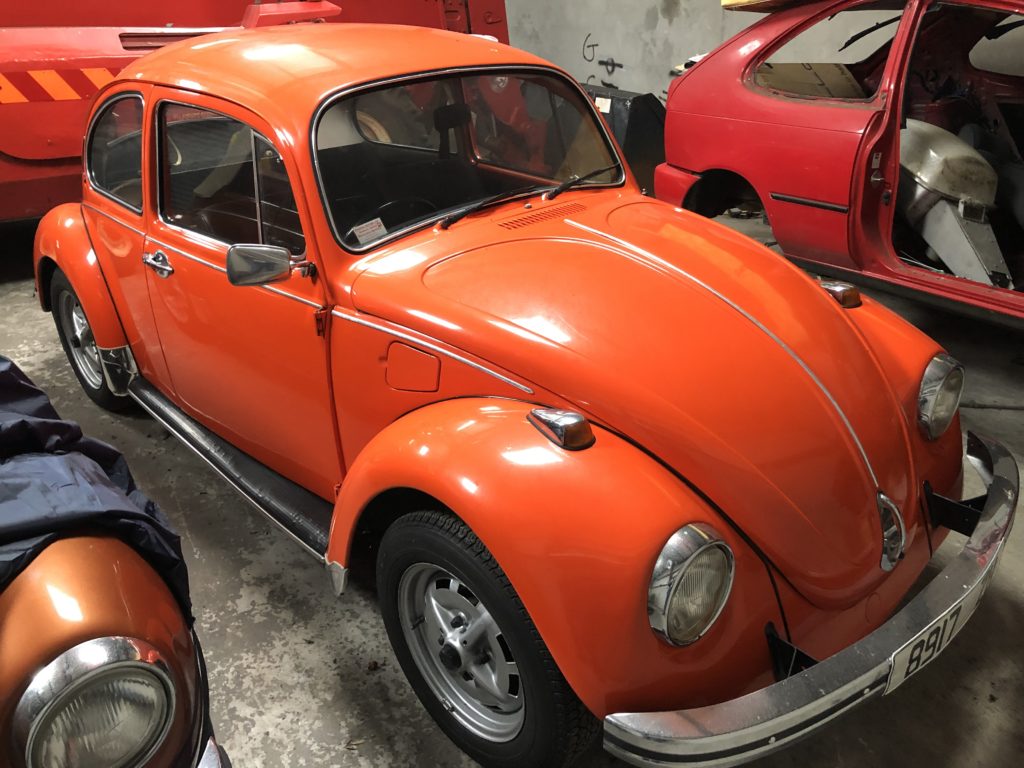 This Beetle is a 1300S, a special edition Beetle and is one of my all time favourite 1300S Beetles in the country. It’s owned by Florence Murphy and was bought by her late husband Johnny Murphy, a man whose name is well known by anyone who owned a Volkswagen in the Cork, Limerick and Kerry regions. The man was a genius when it came to these quirky little cars and his loss is still being felt to this very day. In our research for the book on Volkswagen in Ireland, Johnny Murphy’s name continues to be mentioned and it is always with great respect and admiration he is talked about.

The Beetle itself is extremely original and maintains all of its original 1300S features such as the heated rear window, disc brakes, high ratio gearbox and its original 1600cc engine but Johnny also wanted to make it more user friendly so he added a fan from a later Beetle to clear the windscreen, a modern radio, an under-dashboard parcel shelf as well as fitting later Beetle seats for more comfort. Johnny also fitted a Kamei rear vent cover on the engine lid which allows air to flow into the engine as it should but keeps rain out, something we need here in Ireland!

There are a few rust spots starting to appear but that is to be expected of any car that was assembled nearly 50 years ago. Despite the few rust issues, this 1300S still wears its original paint and can maintain a shine when polished. 8917 ZH is a dream Beetle for anyone like myself who is a fan of the 1300S model because this VW is pretty much as it was when it left mainland Europe bound for Ireland.

Being a 1300S Beetle, it was assembled in Belgium and was imported by MDL into Ireland as a fully built up Beetle in January of 1973. Only 300 1300S Beetles in total were imported, a traditional number Volkswagen Ireland had when it came to special edition Beetles.

The 1300S left MDL on the Naas Road in Dublin and was delivered to VW Motors in Phibsboro in North Dublin. A Smithfield based company put the cash down and the 1300S was to be their company car from February 1973 until October 1974 when it was bought by a gentleman by the name of Mr. O’Mahony from Millstreet in County Cork. As the 1300S approached its 3rd birthday in 1976 it was offered for sale again and that is when Johnny Murphy became the next keeper of 8917 ZH.

As a mechanic who would be in overalls and carrying greasy tools and oily rags as part of his profession, Johnny didn’t want to use the 1300S as a daily driver because it was too nice, instead Johnny preferred using it for the nicer journeys, the journeys where overalls and oil covered rags weren’t involved. This was a Beetle he liked and wanted to mind as best he could, and he certainly did. Johnny liked the extra power from the 1600cc engine and could be heard commenting that “she’s purring like a kitten” when referring to how quiet and gently the engine revved and also how effortlessly he could overtake another car or tackle a hill when behind the wheel of the 1300S.

As time went on though even those journeys in the Beetle were reduced as Johnny used an array of vehicles during the week and at the weekends including a 3 litre Ford Capri, meaning that this 1300S spent longer periods of time in storage, only coming out for VW shows and vintage runs. In later years it was driven by the late Darryl Murphy to and from VW shows such as the Kilcommon Festival in Tipperary and The Beetles Reunion in Limerick as well as on a number of the local vintage runs but would always be put back into storage after every run.

We would like to think that the memory of Johnny Murphy and Darryl Murphy will live on in the stories that surround both men and the preservation of this wonderful 1300S Beetle. May Johnny and Darryl rest in peace.