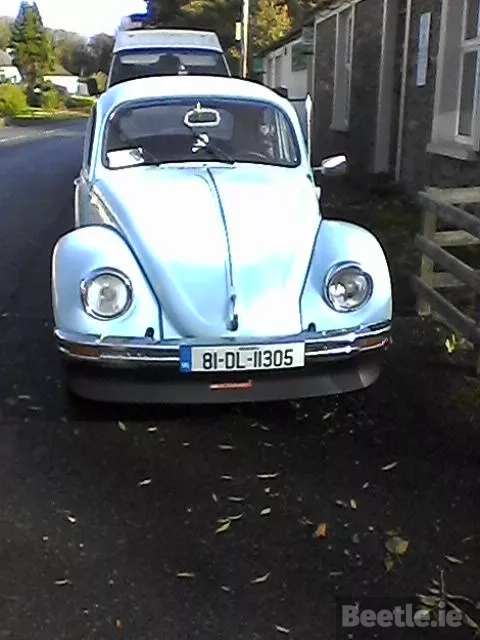 It’s not often that we see a 1980s Beetle submitted to the Beetle.ie Census but Jim McCallum did just that when he emailed in the details for 81 DL 11305.

Jim remembers this Beetle when it was a fresh new car in Northern Ireland. I didn’t recognise the Beetle at first but then Jim informed me that it wasn’t always blue but in fact it was silver originally. The penny dropped for me when Jim said that this silver Mexican Beetle would travel the island to lots of VW shows where the crowds would instantly be drawn to it to look at (and hear) the massive sound system that was installed. I remember seeing it at one of the Kilcommon Festivals in Tipperary with its unusual chrome rims, tinted rear lights and of course, the stereo that was pumping music all day! I’ve included two of my own photos from the Kilcommon Festival and maybe they might jog your memory too.

First registered in August 1981 in Northern Ireland, we’ll let Jim tell you about this unique Beetle that’s been on the show scene for many years.

Jim: “From memory this Beetle came into the north new in 1981 and was with the same family until the late 90s. In the early mid 90s it was a regular on the show scene, winning the accolade of loudest car at a few of them with its awesome sound system. I even think it had a Sega Megadrive onboard at one point. Sadly, as happens with some old VWs, it was left parked up and became quite neglected looking. In the 2000s it changed hands a good few times before it ended up in Derry where it was given a full resto before ending up in Donegal. The first of my two photos shows the Beetle after its restoration and colour change to blue while still wearing its original Northern Ireland registration. The second photo shows the Mexican Beetle in Donegal with its new Southern Ireland registration number.”

Thanks Jim for submitting this Beetle. I always wondered what happened to it because it was at so many shows and then it vanished. It’s great to see it back on the road after its restoration in Derry.