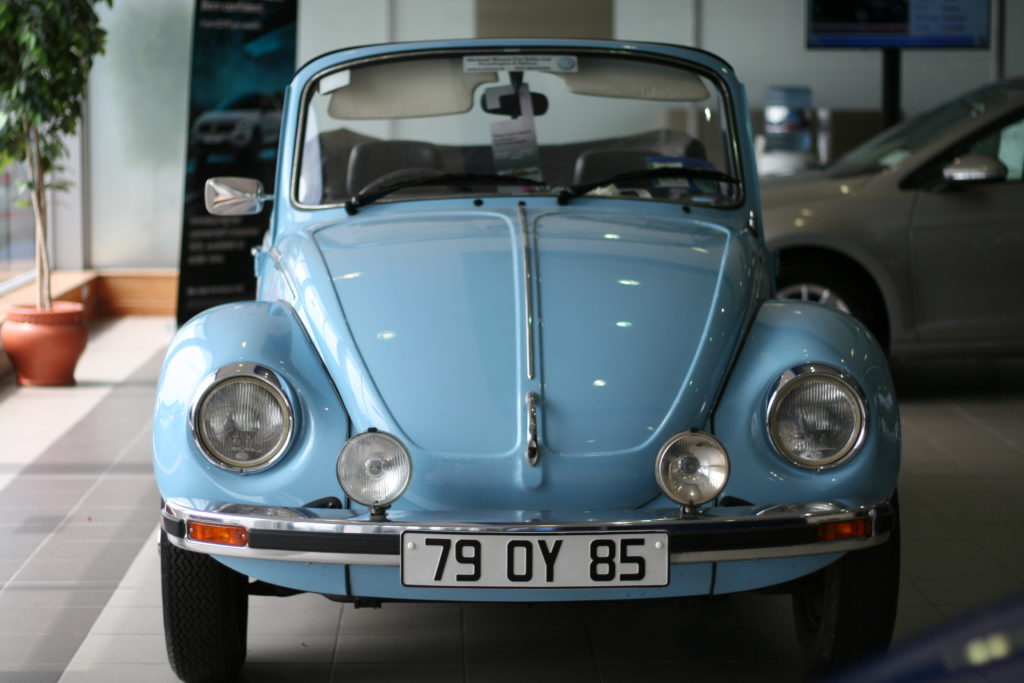 Here’s something you don’t see every day, a brand new Beetle Cabriolet!

It’s the pride & joy of Michael Moore himself. Micheal is the owner of Michael Moore Car Sales in Athlone and Portarlington. He got the VW dealership in 1978 and while doing that he was asked if he would like to order a Cabriolet so he chanced his arm and ordered two; a white and the blue one you see here. Michael was then told that he would not be getting them as the demand was so high but then in January 1979 two Karmann Cabriolets arrived to his Portarlington dealership. The white Cabriolet was sold to a Dublin publican who wanted to give it to his son for his 21st birthday. That was then damaged in an accident. It was repaired but has not been seen for a long time, presumed scrapped.

Michael’s Florida Blue Cabriolet only has 1,808 miles on the clock since 1979. For many years it was in the showroom but Michael did use it over the 40 years. He was going golfing in Thurles so put the clubs across the back seat where they scraped the metal under the rear nearside window. Nothing major and adds to its history.

With just 1,808 miles on the clock it’s as close to a new Karmann Cabriolet Beetle as you will find in Ireland. While I was there a new battery was put in and she fired up straight away. It has needed a new carb as it was getting fouled up from the occasional starts, as you would expect with a car in this situation.

When Micheal got his new Karmann he decided to add a few accessories to personalise it. The accessories he ordered and fitted were the chrome vent covers on the engine lid, a radio, spotlights and the Lemmertz rims complete with the hard to find centre caps.

If you are ever passing through Portarlington, take a few minutes to stop in and admire what must be one of the most original looking 133 Beetles in the country. If you’re restoring a Beetle, especially a 1303, and you want to know what it should look like then this is the perfect template to work from.

You are probably wondering why there is an import registration plate on this 1303 and it’s the same for many dealers in Ireland who had older unregistered models in their showrooms. In 1992/3 the government brought in a law stating that in order to register a car for the first time it must have a catalytic converter fitted. This meant that after 1993 no car could be registered for the first time in Ireland without a catalytic converter, older imports excepted of course. Each dealer was then forced to register their cars with modern registration numbers or face the prospect of never being able to register their car. Some were forced to go with 92-D-????? or whatever their county was while others went for age related plates like Michael did.

Thanks to Michael Moore, his son Robert Moore and Frank Fitzpatrick for being so accommodating during our visit. If you’re looking for a new or used VW or Mercedes, hit them up: www.michaelmoorecarsales.ie

We will be doing a proper photoshoot of Michael’s Cabriolet for the book.