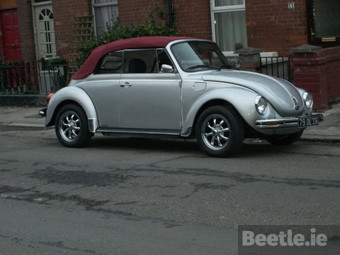 This 1979 VW Cabrio was imported into Ireland in the mid nineties. It was originally supplied to the US as it had the impact bumpers and larger than life wing mounted indicators. It also had the fuel injected engine that all US spec Beetles were required to have. The single exhaust outlet on the rear valance will identify the fuel injection.
In 2010 the Karmann Beetle Cabriolet was restored by Emilio’s Beetles before finding its new home in County Sligo where it still is today. In fact, you will only see this beauty out and about on nice sunny days! This baby lives a very pampered life!
The restoration consisted of new front and rear valances, the rear being changed to allow for twin tailpipes as the fuel injection system was replaced with the more traditional carburettor setup that we are more used to seeing on this side of the pond. The original red paint was to go and in its place Emilio’s Beetles laid down a beautiful silver, topped off with a new maroon hood which looks awesome. The interior was reupholstered in black with red piping and there was also a new steering wheel fitted. The large US spec impact bumpers were replaced and to smarten up the exterior, a new set of chrome 8 spoke rims were mounted on each corner. This is one distinctive looking Karmann Beetle Cabriolet.