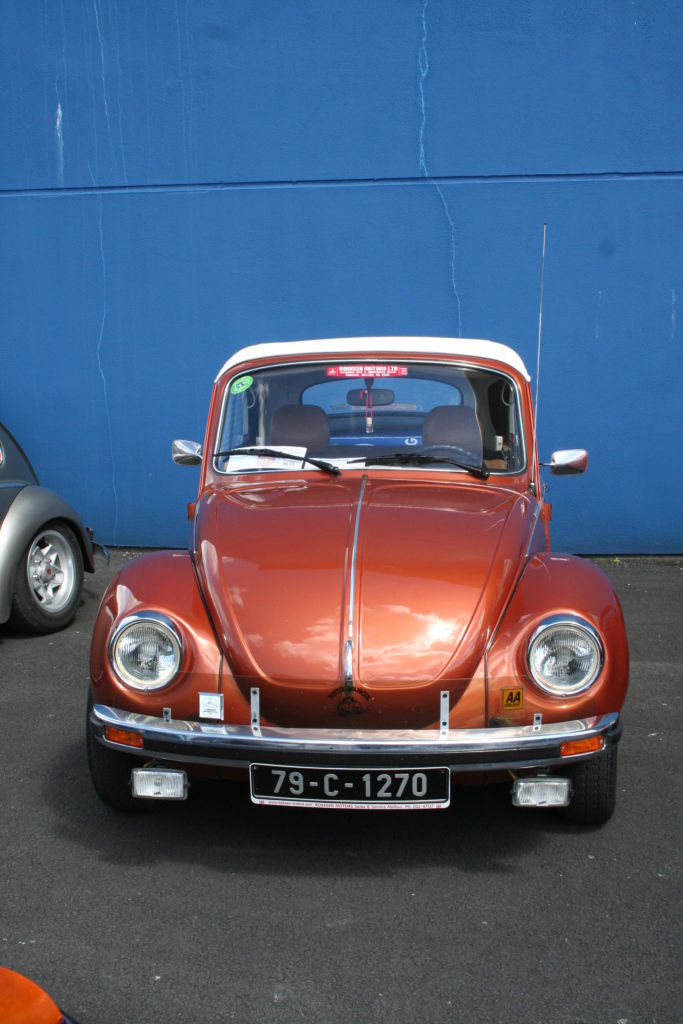 The late, and sadly missed Johnny Murphy, and more importantly, his wife Florence are no strangers to this census. But there’s more to Johnny & Florence Murphy than their beautiful Volkswagens because if you owned an aircooled VW and you called Munster home then you needed to go to Johnny when he was in business. Volkswagen trained, Johnny was one of these men that could diagnose almost any mechanical issue by the sound of the engine as you drove into the yard. What he didn’t know wasn’t worth knowing. Sadly Johnny has left us but his legacy lives on amongst the his many loyal customers and those who knew him through his involvement with classic cars. One such classic car that Johnny is best known for is his stunning Karmann Beetle Cabriolet that he and Florence personally imported from Germany.

The 1600cc Cabriolet is finished in the most desirable colour of Brazil Brown Metallic (L96F), a colour that really comes alive in the sunshine. The white hood sets the metallic colour off perfectly and we can all see why Johnny and Florence made an adventure out of the entire experience by flying to Germany and driving their new toy home. To this day, Florence loves to use this convertible and it is her favourite Beetle to drive.

You can see in the older photo the original German number plate was still on the Karmann as it left the Kilcommon Festival in Tipperary back in July 1992. It shows the letters BOR which refers to Borken in Westfalen which is in Germany’s most populous state North Rhine-Westphalia.

Johnny’s pride & joy was, and still is, in immaculate, original condition and this did not escape the attention of show judges over the years who awarded this low mileage original paint Karmann Beetle a trophy on more than one occasion. In fact, if you look at the photos you can see the First in Class award picked up at the 1996 Beetles Reunion in Limerick that still proudly hangs in Johnny’s garage.

The factory fog lights are still in place under the bumper and the only extras added are for the benefit of the car and they are the Beetle Bouncer stone guard and the Kamei Engine Lid Vent Cover which stops rain water pouring in through the vents if Florence is caught out in a shower. The Beetle Bouncer was a very popular accessory in the 1980s and protected the bonnet of your Beetle by deflecting any road debris away from the front of the bonnet. It works and is still in place on Florence’s Beetle.

If you get a chance to check out this original unrestored Beetle at the next show then we advise you take some time to admire it because this is as good as you will get in terms of original convertibles. What is best about it though is that Florence enjoys her convertible as often as she can. It’s never abused or driven in bad weather but it does get used and that’s what owning an old Volkswagen is all about.

Thanks to Florence for sharing her absolutely beautiful Beetle with us.