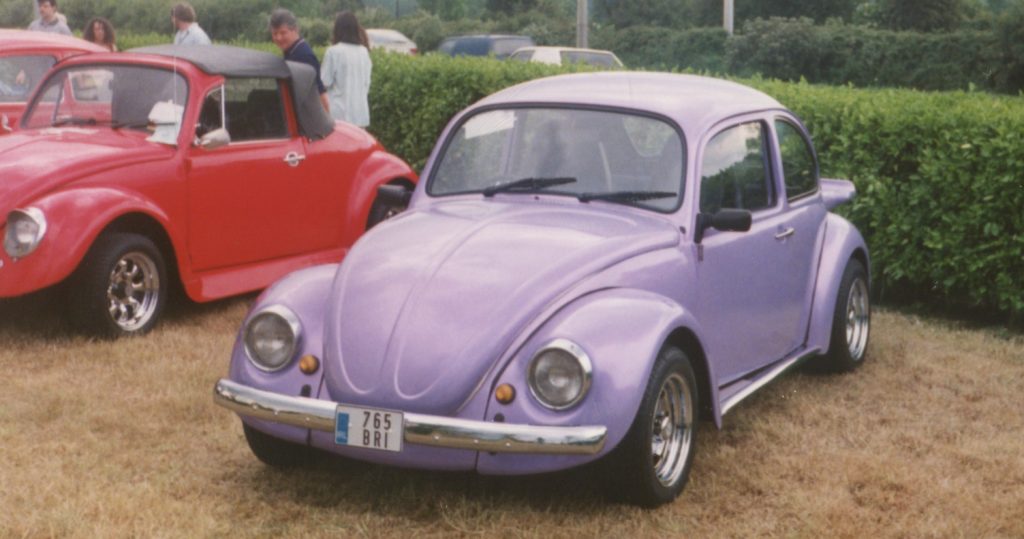 This Beetle couldn’t be any further away from the 1200 Beetle Deluxe that was built in MDL in August 1974. Back then it was finished in Havana Brown (LD8A) with a red vinyl interior. It was sent to VW Motors in Harolds Cross, Dublin where it was sold from in late August 1974 although it wasn’t taxed until the 12th of September.

It made its way to Limerick at some point where Eoghan Hannan got his hands on the keys and decided to modify it in his own style. He worked hard on the transformation, in his back garden from what I remember, so if you’ve ever had to repair/restore an old VW on the driveway in the winter then you know that this wasn’t so easy for Eoghan.

One piece windows, blade bumpers, a whaletail boot spoiler, new metallic purple paint, a 1300cc engine that was detailed in green, wide chrome rims and much more. It was of the time and it looked great. I’m not sure if Eoghan ever drove it like this or sold it on but it hasn’t been seen at shows in that guise so perhaps it has since been restored.

I took the restoration photos at Eoghan’s house in 1991/92 while the show photos were taken at the very first Beetles Reunion in 1992. The show was held at the Two Mile Inn Hotel on the outskirts of the city and has evolved into the massively successful Motorfest Ireland which is now held at Limerick Racecourse, run by Limerick Classic & Vintage Car Club.