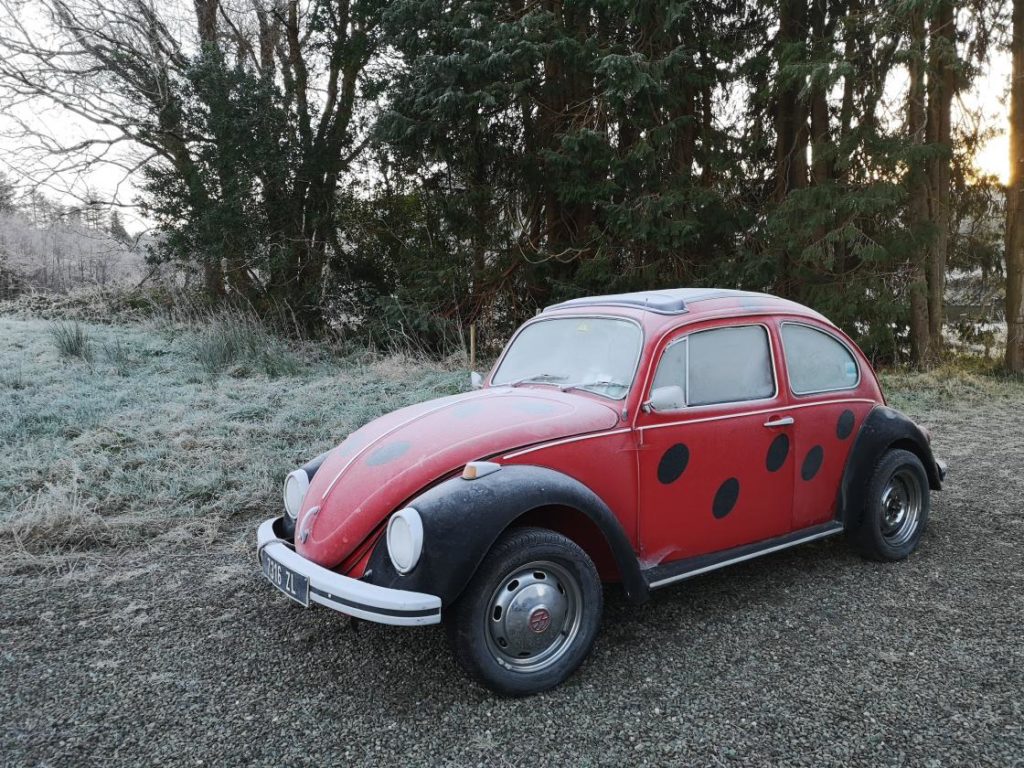 Here’s a Beetle that is so well known in VW cirlces. Anyone who has been to a VW show in or around Dublin will have seen this Beetle. You may have also seen this Lady Bug Beetle around the Blackrock/Monkstown area anytime from 1986 on as that is when the previous owner, Dr. Siobhán Barry added her name to the taxbook.

Before all that though, the Beetle was manufactured as a CKD on the Dublin production line in late 1973. It was finished in Toga White (L90C) and fitted with a 1300cc engine. Registered in November 1973 with a Dublin registration (ZL) the 1300cc Beetle spent the first year with VW Waterford. Once returned to Dublin it was then sold to its second owner owner in Blackrock which was where it was to stay all its life, with the exception of a short stint in Wicklow.

7316 ZL would have two more owners before Siobhán became its very proud new owner in May 1986. Siobhán drove the Beetle every day, well, every day that she wasn’t on her bike!

By 1995 the by now black and red Beetle was in need of some TLC so Siobhán took her Beetle to Emilio’s Beetles which were then based in North Dublin. A full restoration followed with the list of new panels which included both front and rear quarter panels, doors as well as a the ragtop. It was at this stage that the Lady Bug was born.

Once it left Emilio’s Beetles, 7316ZL would be a regular site back at Emilio’s Beetles when it would be in for regular servicing or to have small scuff and parking dents tended to. By 2004, almost a decade of daily driving and being parked on the street, it was decided a freshen up of the entire paintwork was in order so it was back to Emilio’s Beetles to be freshened up. Careful attention was paid to ensure the Lady Bug retained her spots and the “Chiaróg Eile” script over the rear window.

Siobhán taught all 4 of her children; Niamh, Neasa, Sadhbh and Conn to drive in this Beetle and according to her husband Joe, she made it to every single Irish Classic and Vintage Motor Show in Terenure and has over 20 plates to show for it. Siobhán was also a member of the Southern Volks Folks owners club.

Sadly in November 2017 Siobhán passed away, just 9 months after having her Beetle repainted one last time while in her care. With no garage outside the family home in Monkstown and nobody using Siobhán’s Beetle, the family made the decision to store the Beetle in a family garage in Cork while they decided what would be the best thing to happen to it.

Hugo Monks was a neighbour of the Barry family, owned a VW Camper and was an active member of the Eircooled VW club. Hugo had developed a friendship with Siobhán and her husband through their VWs and had also worked on the Lady Bug on a number of occasions when it wasn’t going as well as it should have been.

Fast forward to July 2019 and Hugo bumped into Joe and they began talking about Siobhán and of course her very special Beetle. Joe then threw a complete curveball at Hugo by gifting him Siobhán’s Beetle. Knowing how much work he had done to it over the years and how Siobhán respected Hugo, Joe felt this was the perfect home and the more importantly, the ideal keeper for Siobhán’s pride & joy.

Hugo still can’t believe Joe’s generosity and is very humbled by this. Hugo recently collected the Beetle from Cork, on a very frosty morning, as you can see in the photo, and has already begun the task of reinstating this well known and much admired Beetle.

And yes, we think Hugo will be carrying on Siobhán’s tradition and bringing the Lady Bug to Terenure. I hope he has somewhere to store all of the show plates!