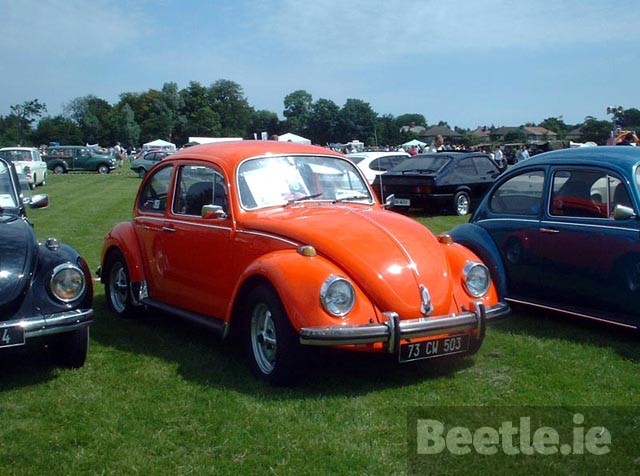 This was a UK-import 1973 GT Beetle I was very familiar with back around the early ’00s. Back then it was owned by Con Kennedy from Dublin who had it restored by Ian Clandillon in Kildare. It was very original and included all the defining fetaures of a UK GT Beetle: the tan interior, wood & chrome gear lever, the Kamei tunnel tray as well as the usual 1300S features the equivalent Irish 1300S/Power Pack Beetles got: the 1600 engine, high ratio gearbox, heated rear screen, disk front brakes. It was re-finished in its original colour of Tomato Red and wore its original GT “sports” steel wheels.

Con was a real GT fanatic at the time, even putting together his own website dedicated to the GT Beetle. He used to bring it to all the events attended by the Southern Volks Folks back around then and I have tons of photos of it at those shows. Because it was at them all!! It’s photographed here at Celbridge, Terenure, Castleknock and the Dublin St. Patrick’s Day parade, all in 2003.

It’s still on the go these days after passing through a few owners and undergoing a few minor modifications. Great to see such a special car being loved by successive owners over the years. Included are some more recent photos, note the spot lamps in one photo and the EMPI 8-spokes in another.

UPDATE 23/07/18: The car is currently owned by Shane Mc Guinness in Co. Meath who purchased it in 2008 from Anthony Brennan from Co. Monaghan. Anthony bought the car a couple of months after Con Kennedy had sold it on to another guy. Anthony carried out a full restoration at this time. Anthony sadly passed away tragically at a young age soon after selling it on to Shane, the current owner. Shane hopes he has kept Anthony’s memory alive through the car.