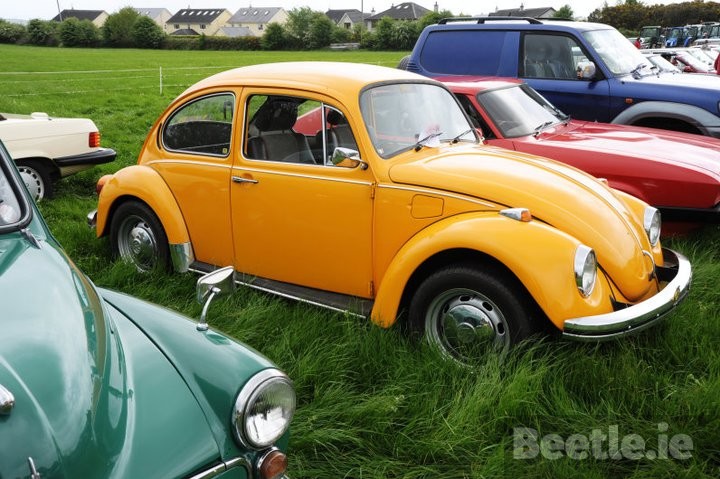 A GT Beetle, or 1300S / Power Pack as we knew them here in Ireland is a great Beetle to own. They make the perfect driver thanks to their 1600cc engine, high ratio gearbox, disc brakes and heated rear window. They were also fitted with Lemmerz GT 4.5j x 15″ wheels which set it apart form the other Beetles on the road at the time.

This particular Beetle is a UK spec model, , registered in March 1973 so it was badged as a GT Beetle. 73 C 872 was on display at the Crossbarry Vintage Run which took place on May 8th 2011. Roger O’Sullivan took the photo and thankfully submitted it to the Beetle.ie Census.

Unlike the Irish market 1300S Beetles which were available in Tomato Red (L32M) only, the UK destined 1300S models came in three vibrant colours; Tomato Red (L32M), Apple Green (L64M) and in the case of this particular GT Beetle, Lemon Yellow (L15M). The UK spec GT Beetle also came with beige cloth upholstery, a chrome gearstick with wooden gearknob and a tunnel tray.

The Lemmerz GT wheels have long since vanished from this GT Beetle, having been swapped for a set of stock steel wheels and hubcaps. The interior has been changed thanks to the addition of high-back front seats from a more modern car but from what we can see it looks to be pretty stock and stands out thanks to the chrome trim such as the engine lid vent trim and rear vent trim.